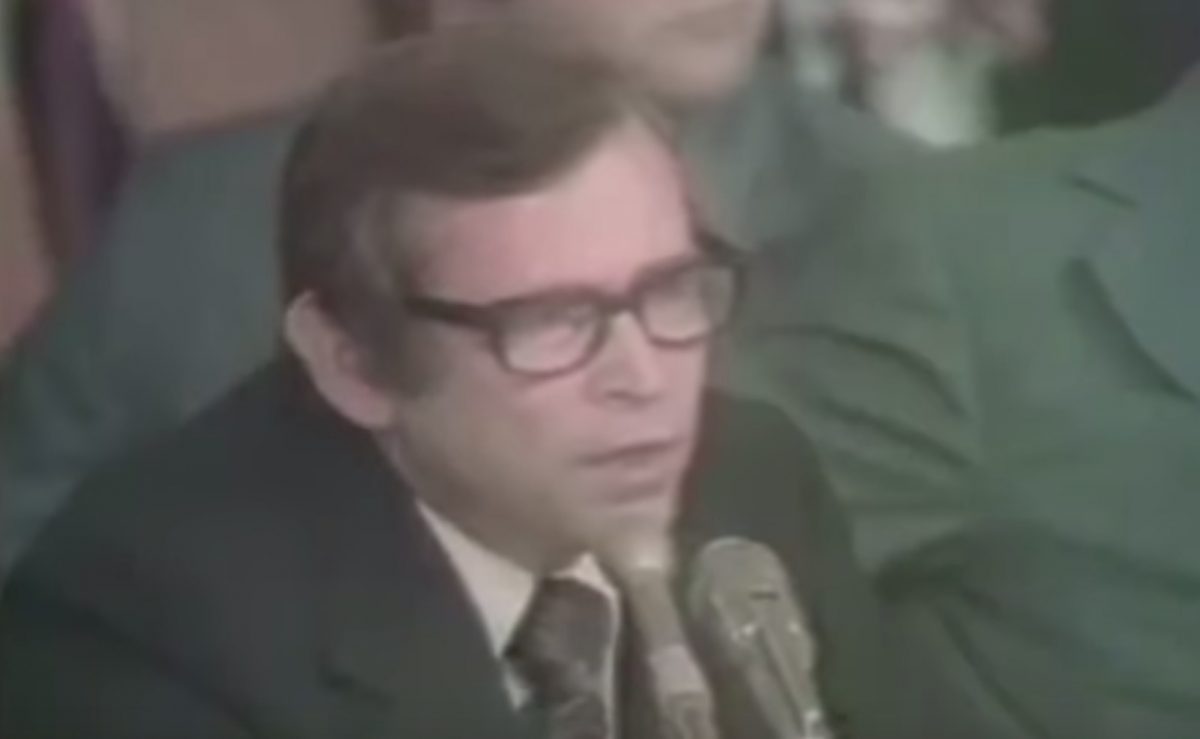 The legal problems currently facing President Donald Trump are unlike any other White House controversy we’ve seen before. Because the closest analogy would be the Watergate break-in and cover-up that eventually led to President Richard Nixon‘s resignation, it’s only natural to look to that period for insights here.

The true hero in that historical scar on American politics was Tennessee Senator Howard Baker, who famously put is patriotism before partisanship and led the Republican party to hold Nixon, also a Republican, accountable for his crimes.

Facing inevitable impeachment proceedings, and an approval rating in the mid-20s, Nixon eventually stepped down and spent the rest of his career trying to rehabilitate his reputation.

The situations are very different: Nixon was on tape approving the cover-up of a criminal break-in of the Democratic National Party’s offices. But conversely, and more importantly, Nixon did not enjoy the support of the most-watched cable news outlet, as Trump does with Fox News. Hell, there wasn’t really a broadcast version of political media outlets in the halcyon days of the early 70s.

The world is much different in 2018. As Fox News commentator Geraldo Rivera noted recently, Nixon would never have resigned if Fox News was around, creating interference for him in the manner that Fox News consistently offers to the current administration.

Last week, court filings from the Southern District of New York have raised significant questions over how to hold a sitting president to account if and when he or she is found to be guilty of a criminal wrongdoing.

President Trump is thus far alleged to have directed Michael Cohen to commit felony campaign finance violations. Prosecutors made it clear in Cohen’s sentencing memo that they believe the commander in chief defrauded the American electorate by directing the hush money payment to adult film star Stormy Daniels and former Playmate Karen McDougal, both of whom claimed they had affairs with Trump in the past.

Are these allegations amount to crimes worth impeachment hearings? Can a sitting president be indicted? If so, how?

These are legal questions. For our purposes, the larger issue is whether any members of President Trump’s Republican party find the allegations troubling enough to hold him in any way accountable — in the manner that Baker signaled to his own party that following the rule of law is of greater importance than political expediency.

Thus far, all indications suggest a resounding no.

The GOP establishment has shown zero stomach to criticize the current king of the bully pulpit and his 56 million Twitter followers. If the Republican base learned anything from the last midterm election, it is that getting sideways with Trump and his base is not good for one’s political career in the Grand Old Party. It’s Trump’s now, and expect nothing less than blind fealty from even the most senior and established elected officials.

And then there’s the media angle. Fox News has forever been a right-of-center outlet since it was founded by former Nixon aide Roger Ailes. There was a time, however, when Fox News followed the lead of the Republican party. That has changed over the past five to ten years. Elected Republicans now follow the lead of Fox News thought leaders, often out of fear that criticism from the network will keep them from reelection.

The synergistic relationship between the Trump White House, Fox News, and Capital Hill Republicans is has been covered exhaustively. And as I wrote over a year ago, if anyone can impeach President Trump, it’s Fox News, making the point that as long as Trump has the support of the highest rated cable news outlet, he should never fear impeachment.

The obvious corollary to that is that as long as Fox News is in support of Trump,  he’s safe. Remember: impeachment is a political proceeding, not a criminal one. And no Republican lawmakers can be Howard Baker because Fox News opinion programming stars would tear them apart, and they would be out of office by the next election.

If Democrats pursue impeachment without the support of the Republican party, then it will likely play as poorly as when the GOP held impeachment proceedings for President Bill Clinton following his affair with White House intern Monica Lewinsky. That was such a political lead balloon that the Democrats added congressional seats in the 1998 midterms that followed.

So Fox News ostensibly controls the GOP, who are the only ones who can truly hold Trump’s alleged criminal feet to the fire of justice in any meaningful way. And if that doesn’t depress you, then take a look at the most prominent thought leaders who so openly promote the Trump agenda of undermining the institutions of justice and law enforcement.

For anyone looking to put patriotism ahead of party, it’s a dire situation. The last, best hope may be in the person of Tucker Carlson. He is the independent thinker and proud iconoclast who loves to flout conventional thinking at the 8 PM hour on Fox News.

Carlson seems to be smart enough to know not to go all in on Trump and has been publicly critical in a recent interview with a Swiss publication.  Calling Trump unable to keep “sustained focus,” Carlson said that Trump has not yet kept his promises. Not the harshest criticism, but compared to his pro-Trump Fox News colleagues, it’s about as harsh as you can expect.

In short, impeachment proceedings can’t effectively happen unless and until Republicans are on board. And Republicans will never be on board until and unless the loudest voices at Fox News — those almost exclusively watched by Trump’s #MAGA base — decide to flush their allegiance to Trump down the toilet.

So as the headline reads, America’s next Howard Baker is far more likely to come from the ranks of Fox News than anywhere else. Which is not something people should expect.

America’s Next Howard Baker, however, is a competitive reality show that I would watch.

Colby Hall is the Founding Editor of Mediaite.com. His first political memory was complaining to his mother about Watergate hearings preempting midday game show programming in the summer of 1973.