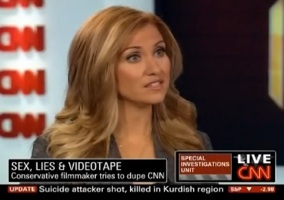 Earlier today, James O’Keefe released a statement in which he expanded upon his initial denial that he planned to sexually humiliate CNN correspondent Abbie Boudreau, a denial that is belied by additional evidence presented in Boudeau’s “Right on the Edge” documentary. O’Keefe has maintained that he didn’t write the “CNN Caper” document that outlined the plan, and never intended to follow through with it. In addition to the “CNN Caper” document, though, Boudreau also released emails and telephone recordings that corroborated key elements of the plot.

The plot called for O’Keefe to lure Boudreau, under false pretenses, onto a boat “filled with sexually explicit props and then record the session” in order to embarrass Boudreau and CNN. According to Boudreau, the “script” called for the prank to end with Boudreau in tears, begging to be let off of the boat.

We reached out to Boudreau to see if she had a reaction to O’Keefe’s statement. Her response was brief and to the point: (via email)

“I am not interested in debating James O’Keefe about what his plans were for me on his boat. His statement reinforces what we reported in our documentary.”

O’Keefe’s statement begins by explaining his relative silence on the matter so far:

Now that I’ve had a chance to watch CNN’s “Right on the Edge” documentary, I’m happy to comment. I apologize for not saying anything sooner, but don’t want to comment until I have all the facts at my disposal.

O’Keefe was wise to wait until he could see the documentary before tailoring his statement, but he makes a brave assumption that the “Right on the Edge” documentary contains “all the facts.” Boudreau has stated, in several interviews, that much of the material surrounding the incident has been withheld, ostensibly due to its “graphic nature.”

Boudreau has produced several O’Keefe emails that corroborate the “CNN Caper” document, but O’Keefe offers nothing to support his claim that he rejected the plan. In fairness to O’Keefe, his failure present an authenticatable email that shows him rejecting the idea is not, in itself, proof of anything. Coupled with Boudreau’s reporting, however, it’s difficult to view this situation as anything but a case of “He said, she proved.”