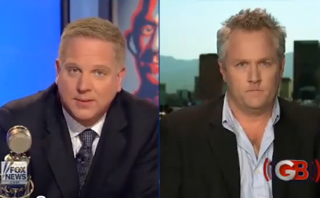 Andrew Breitbart is sounding the war drums, but George Soros, John Podesta, and all the usual suspects are safe. In fact, he’s not after a liberal at all this time. The Shirley Sherrod affair has torn asunder the once amicable relations between Breitbart and his now-former ally in the war on liberal elitism Glenn Beck, to which Breitbart has offered $100,000 in charity donations in exchange for a lie detector test to prove it was he, and not Breitbart, who aired the unfairly edited video.

Breitbart, who had already hinted at being dissatisfied with the way Beck had treated him during the affair, went on a full Twitter assault Tuesday night, challenging Beck to respond to him publicly and his fans to justify Beck’s behavior or repudiate it. Breitbart made it explicit that he had attempted to keep the matter as private as possible, and asserted he had visited Beck’s office earlier this year and expected public repercussions for it. “You don’t know half the peril he put me in,” Breitbart told one tweep, asserting he had hoped Beck would reconsider publicly. Not seeing any, he is now going public, bringing back the $100,000 challenge he initially proposed to get access to the full archives of JournoList to request Beck take a lie detector test.

He then asked of Beck’s fans (many of which, presumably, are also his) a series of questions, the last of which accuses Beck of siding with Media Matters for America over Breitbart: 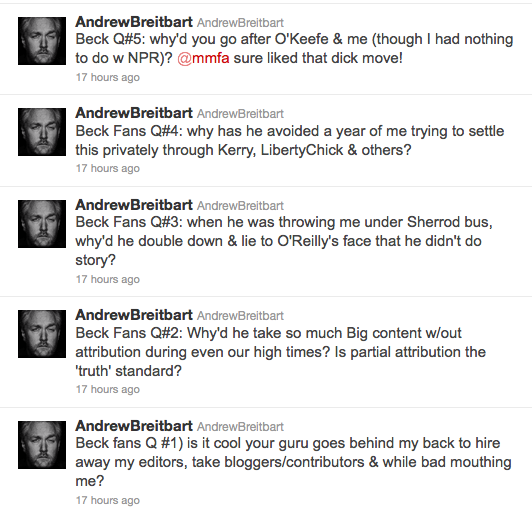 As of press time, Beck and the Mercury Arts team have had about 48 hours to respond to the accusations and have kept mum on the matter, so their side of the story remains to be seen, though most of the accusations are rather clear. The murkiest of the lot is Breitbart’s claim that Beck “hired away my editors”– though one could assume by deduction he could only mean current Blaze head Scott Baker, who was previously the head of Breitbart.tv. Breitbart has yet to name names on this front, however, and as with every other accusation Breitbart has thrown at them, Mercury Arts have not given comment.

The main accusation, however– that the true wrongful editing of Sherrod occurred on The Glenn Beck Program and not on Big Government— requires a thorough scrutiny of the timeline of the events of that day, which it likely won’t properly receive unless either legal action is taken or Beck speaks up. That is all to say that the merits of Breitbart’s case are not (pun intended) media matters, but investigative ones. What is more the concern of those who follow the moves of relevant media figures is what a public spat between Breitbart and Beck would look like, and who would more likely come out winning.

Attacking such a prominent member of the right is uncharted territory for Breitbart. While Breitbart’s empire has taken on many large targets– the NAACP, NPR, the SEIU, et al– it has never participated in friendly fire of the caliber it currently attempts. This means it has never had to cultivate public sympathy in the same demographic as its enemy. The way the current media landscape is set up, there is nothing Breitbart could possibly do to attract the political sympathy of someone who thinks, say, Eric Boehlert is mostly correct in his political notions or vice versa. A fight with Beck is a completely different beast. After the initial confusion of realizing these two libertarian-leaning conservatives are disputing over something, they then, based upon the above facts, have to take a side. And much of that determination will hinge upon the persuasive mechanisms of the two political figures, and the machinery they have at their disposal. After all, you can only go to war with the army you have.

With that in mind, here is a tale of the tape, if you will, of where Breitbart and Beck stand on the three media platforms they inhabit, which should clarify why, should Beck choose to engage, this would be quite the uphill battle to grab conservatives’ attention:

So using these indices as a way to evaluate the extremely elusive quality of influence, Breitbart has the home advantage on the internet (though it’s not helping arithmetically) but his bully pulpit among print readers and television viewers present a serious disadvantage. As formidable as his online army may be, he still has millions of viewers to contend with that take Beck’s word for gospel, and tons more that, as casual viewers, may have only heard his name correlated with the Sherrod scandal such that the entire idea of Beck being behind her smearing will seem alien. Then there’s the bizarre lie detector challenge, which is derivative on both counts– the $100,000 he offered before for the full archives to Journolist; the lie detector test was first proposed to Martin Bashir, which for once may make Beck sound like the more rational of any two people by virtue of not yet having said anything.

But while the $100,000 offer still stands, Glenn Beck hasn’t returned fire, nor has he indicated he has any interest in using his bully pulpit to fight Breitbart’s claims. Here’s to hoping that for the sake of the organized right– which, if judging by the 2012 presidential field, is having more than enough time organizing itself– the former allies clean this mess up with as little carnage possible, and can go back to delivering delightful cable news nuggets like this: