Breitbart To Tea Partiers: ‘We Outnumber (Liberals) And We Have The Guns!’ 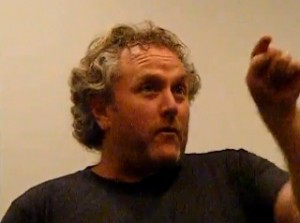 Conservative media provocateur Andrew Breitbart, speaking to a Tea Party crowd of over 60 people in Lexington, Ma. on Friday, got a little bit carried away with his own patter. He told the crowd that he sometimes thinks to himself, “Fire the first shot” in a hypothetical civil war with liberals, explaining that “We outnumber them in this country, and we have the guns.”

Although Brietbart told the crowd “I’m not kidding,” in response to their laughter, he probably was kidding, and probably shouldn’t have been.

Speaking to the $45 a head crowd at the presumptuously named “The Ampitheater” in Lexington, Breitbart was asked about this past weekend’s “Days of Rage” protest against Wall Street. “Bring ’em on!” he responded, before launching into his civil war hypothetical:

“I must say, in my non-strategic… ‘cuz I’m under attack all the time, if you see it on Twitter. The (unclear) call me gay, it’s just, they’re vicious, there are death threats, and everything. And so, there are times where I’m not thinking as clearly as I should, and in those unclear moments, I always think to myself, ‘Fire the first shot.’

Bring it on. Because I know who’s on our side. They can only win a rhetorical and propaganda war. They cannot win. We outnumber them in this country, and we have the guns. (laughter) I’m not kidding. They talk a mean game, but they will not cross that line because they know what they’re dealing with.

They understand that. These are the unspoken things we know, they know. They know who’s on their side, they’ve got Janeane Garofalo, we are freaked out by that. When push comes to shove, they know who’s on our side. They are the bullies on the playground, and they’re starting to realize, what if we were to fight back, what if we were to slap back?

The crowd lapped it up (predictably enough given the recent conservative shift toward butch, overcompensating posturing), and Breitbart, clearly caught up in his riff, eagerly piled on seconds. He’s the Miles Davis of right-wing guano, but he hit a few irredeemably sour notes here.

Although Breitbart frames his rant in terms of the death threats he receives, and is clearly working the crowd for laughs, saying that he thinks “Fire the first shot,” because conservatives have all of the guns crosses the line from harsh rhetoric into irresponsible speech. Unlike the recent brouhaha over union leader James Hoffa’s fiery voter-encouragement comments, Breitbart goes on to clarify that he is not speaking metaphorically about voting, but rather, a literal civil war.

Later in the clip, though, he even seems to invite violence on himself, saying, “There’s just a part of me that wants them to walk over that line.”

If there are any minds out there, liberal or conservative, that are impressionable enough to be affected by this, let me be the first to urge them not to “fire the first shot,” and also not to “walk over that line.”

A big part of Andrew Breitbart’s appeal is that he doesn’t filter his live-wire commentary at all, and a big part of that probably stems from the fact that the guy never seems to sleep. Maybe it’s time he had a nap.

There’s a lot more video of Breitbart’s appearance (in which he talks about looking for fights at Whole Foods and not knowing anything about Elizabeth Warren), but here’s the clip that’s getting all of the attention: