Andrew Sullivan: MSM Failing To Cover Iran Because It’s Not ‘Cheap And Easy’

Andrew Sullivan: MSM Failing To Cover Iran Because It’s Not ‘Cheap And Easy’ 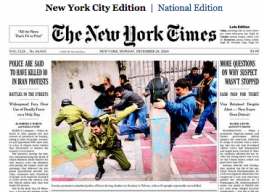 “Readers keep emailing me to tell me that as far as cable news is concerned, today’s events might as well be happening on Mars. I cannot confirm this because when real news happens, the last place I look is the cable news channels. But I cannot say I am surprised. Since this does not have a cheap and easy way to splice into the red-blue fight, they have no idea of how to cover it.”

— Andrew Sullivan, responds to reader’s complaints about how much coverage the escalating conflict in Iran is currently mustering on the mainstream cable outlets.

So why is there less coverage this time around than there was in June when #iranelection swarmed Twitter for a week causing even the State Department to take notice? Obviously Sullivan is not alone in his habit of looking for real news in places other than cable TV. And it should be noted that this week’s clashes in Iran was the New York Times front page lead yesterday and additionally was noted in Obama’s statement to the press yesterday, something he notably did not do back in June.

However, Iran has definitely not taken over the news cycle, and the public’s imagination, the way it did back in June. This despite there arguably being more video available than there was six months ago. Is it merely bad timing? In June Iran was wiped off the cabler’s by Michael Jackson’s death. This week it faces a country and a news cycle (if not necessarily a president) consumed with an averted terror attack. And rightly so.

Yes, Thursday’s thwarted attempt to explode a plane happens to be tailor-made for cable TV, however it’s also a big deal. Arguably, more so because of what it has revealed about the holes is the TSA than anything Umar Farouk Abdulmutallab actually did. Also the fallout from the new security restrictions, are being felt daily, nationwide, by almost everyone. All combined it’s a hard news story to beat. But fear not, #iranelection remains a trending topic on Twitter, meaning that even if you’re not seeing it on your television set, plenty of people are still discussing and reporting. In the meantime, if you’re looking for good coverage may we suggest following ABC’s Lara Setrakian who is based in the Middle East and is excellent, and Jon Leyne at the BBC. Note: Please read comments for additional suggestions.