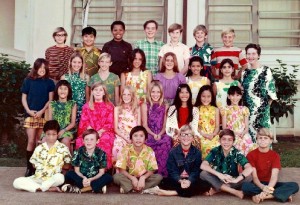 The Mitt Romney high school bullying story has sent right-wingers into a frenzy of the usual denials and deflections, but one example of these tactics, advanced by Sean Hannity Thursday night, only serves to reinforce the real problem with Romney’s 48 year-old bullying incident: his bizarre reaction. Hannity and others are pointing to a passage in Dreams From My Father to tar President Obama as a bully, but are characteristically leaving out the most important part.

The alleged bullying incident itself, while disturbing, didn’t need to be a big problem for the presumptive Republican nominee, but the series of increasingly bizarre, contradictory, and callous reactions from the candidate and his campaign have demonstrated that Romney learned little from the incident, if he even remembers it.

Right-wingers, meanwhile, are engaged in an increasingly desperate damage control campaign. On the somewhat reasonable end of the scale are people like my friend Matt Lewis, who point out that Stu White, one of the people quoted in the WaPo story later told ABC News that he didn’t witness the incident, and only found out about it when the Post contacted him. The only problem is that White never gave any account of the incident to WaPo. They started with five witnesses, and they now have…five witnesses. Trying to pretend this never happened is a losing strategy, since Romney himself, even while claiming not to remember the incident, says he “won’t argue” with the reporting.

What Matt and co. leave out is the fact that Stu White also told ABC News that the Romney campaign wants him to help them do damage control on this story, and he’s “still debating” whether he will. ABC also reported on another “old friend” of Romney’s who described his behavior in high school as being “like Lord of the Flies.”

On the hilarious end of the scale is Breitbart.com’s theory that Romney was just “enforcing Cranbrook’s dress code.”

Then, there’s the tried-and-true tit-for-tat strategy, in which Hannity and others dredge up a superficially similar incident, and try to call it even. In this case, it’s another passage from Barack Obama’s 1995 autobiography Dreams From My Father. Here’s the part the right-wingers are using:

“I’m not her boyfriend!” I shouted. I ran up to Coretta and gave her a slight shove; she staggered back and looked upat me, but still said nothing. “Leave me alone!” I shouted again. And suddenly Coretta was running, faster and faster,until she disappeared from sight. Appreciative laughs rose around me. Then the bell rang, and the teachers appeared to round us back into class.

It was a moment of weakness, to be sure, in which a ten year-old Barack Obama, surrounded by other children who were taunting him and Coretta, succumbed to peer pressure. Here’s how he wound up in that situation:

There was one other child in my class, though, who reminded me of a different sort of pain. Her name was Coretta,and before my arrival she had been the only black person in our grade. She was plump and dark and didn’t seem tohave many friends. From the first day, we avoided each other but watched from a distance, as if direct contact wouldonly remind us more keenly of our isolation.

Finally, during recess one hot, cloudless day, we found ourselves occupying the same corner of the playground. Idon’t remember what we said to each other, but I remember that suddenly she was chasing me around the jungle gymsand swings. She was laughing brightly, and I teased her and dodged this way and that, until she finally caught me and we fell to the ground breathless.

When I looked up, I saw a group of children, faceless before the glare of the sun, pointing down at us.

The chants grew louder as a few more kids circled us.“She’s not my g-girlfriend,” I stammered. I looked to Coretta for some assistance, but she just stood there looking down at the ground.

“Coretta’s got a boyfriend! Why don’t you kiss her, mister boyfriend?”

For the rest of the afternoon, I was haunted by the look on Coretta’s face just before she had started to run: her disappointment, and the accusation. I wanted to explain to her somehow that it had been nothing personal; I’d just never had a girlfriend before and saw no particular need to have one now. But I didn’t even know if that was true. Iknew only that it was too late for explanations, that somehow I’d been tested and found wanting; and whenever I snuck a glance at Coretta’s desk, I would see her with her head bent over her work, appearing as if nothing had happened, pulled into herself and asking no favors.

My act of betrayal bought me some room from the other children, and like Coretta, I was mostly left alone.

Perhaps adding poignancy to the story is Corretta’s ( recollection in a 2009 interview:

Coretta is Joella Edwards, who now lives in Florida. In interviews, she recalled the day Barry Obama arrived as a fifth-grader, having returned to Hawaii from four years in Indonesia with his mother. “He had a brown and white weird-design shirt, and just kind of stood there,” Ms. Edwards said. “I remember thinking, ‘Wow, there’s another black person here.’ ”

“I was ‘the lonely only’ until he came,” she said, adding that she wished she had known then how sympathetic Mr. Obama felt. Five years later Ms. Edwards left Punahou, tired of “the n-word” and taunts of “Aunt Jemima,” she said.

There are a number of obvious differences between this incident and Romney’s, chief among them that Barack Obama actually bothered to remember the incident, and not because some newspaper dug it up, but because it really bothered him. He didn’t try to laugh it off. Like many of the revelations that the right wing likes to harp on (yes, Sean, if only people knew that President Obama used drugs in college), Barack Obama learned from it.