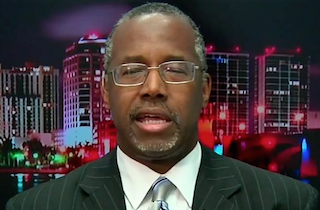 Ben Carson has a USA Today op-ed out with some advice to #BlackLivesMatter about why they need to be angry at the right people. He starts things off by, somewhat surprisingly, defending one of his Democratic presidential rivals Bernie Sanders after he was targeted by protesters at a recent rally.

He called it “lunacy” to target Sanders when he’s not even close to what the major problems are plaguing the black community.

Carson said that the anger they feel is, of course, real and there are serious issues to address, but says, “Unjust treatment from police did not fill our inner cities with people who face growing hopelessness.. Far too many families are torn and tattered by self-inflicted wounds. Violence often walks alongside people who have given up hope.”

He proposes that #BlackLivesMatter focus on failing schools and local politicians who won’t solve the problem, as well as Democrats who need to hear their calls for “honor and dignity” and Republicans who “have ignored us for too long.”

But Carson also targets Hollywood in particular and the movie that took the box office top spot this weekend:

Let’s confront the entertainment industry that lines its pockets by glamorizing a life where black men are thugs and our women are trash. Let’s tell them we plan to start talking with our wallets.

It is time for them to pick on someone else because we have had enough. Demeaning women is not art, and it shouldn’t be profitable. Neither is glorifying violence and equating prison time with authenticity. Straight Out of Compton, #1 in movie theaters, is just the latest example. You only have to watch the trailers.