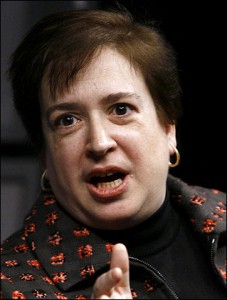 The conservative blogger whose post was pulled from the CBS website after pressure from the White House is surpised the White House cares about “something mentioned in passing, and intended to highlight a political positive about a potential Supreme Court nominee.”

Ben Domenech responded in the Huffington Post that he wasn’t the only one thought Elena Kagan was openly lesbian and said that he viewed it as a “plus” that would please Obama’s supporters.

“I erroneously believed that Ms. Kagan was openly gay not because of, as Stein describes it, a ‘whisper campaign’ on the part of conservatives, but because it had been mentioned casually on multiple occasions by friends and colleagues — including students at Harvard, Hill staffers, and in the sphere of legal academia — who know Kagan personally,” Domenech said.

But the Washington Post’s Howard Kurtz, who broke the story about the WH pressure, thinks Domenech’s defense shows he doesn’t understand how serious the rumormongering was, tweeting “I don’t care about Elena Kagan’s sexual orientation, but for CBS to publish that rumor was obviously incendiary — and the WH was furious.”

Domenech did get some back-up from libertarian and liberal bloggers who tweeted that they, too, assumed Kagan was a lesbian and it was common knowledge at Harvard.  Cato Institute’s Julian Sanchez tweeted “I  hate to defend Domench, but I think he probably genuinely thought she was out. Gay news sites treat it as common knowledge.” Matt Yglesias chimed in: “Couldn’t it just be a mistake? Until this controversy I mistakenly thought she was, in fact, an out lesbian.”

Sanchez and The Atlantic‘s Marc Ambinder have blamed the gay press and blogs for the Kagan-is-a-lesbian story, but the evidence is less than convincing.  It is true gay gossip blog Queerty has said she was out and Ambinder linked to a British gay news consolidator that also claimed it. But most of the mentions about Kagan’s sexual orientation don’t occur in the new sites themselves, but instead in comment sections.  So to say it is treated as common knowledge by gay activists is a significant stretch unless commenters are now considered authority.

Domenech said the strong reaction from the White House signaled that she’s likely the favorite for the job and that they don’t want anything getting in the way of the nomination. “[I}f I were Ms. Kagan, I’d feel pretty good about the fact that the White House specifically responded to this, and did so in such an aggressive and forceful manner — after all, it seems like quite a clue as to who the pick will be, doesn’t it?,” Domenech concludes.