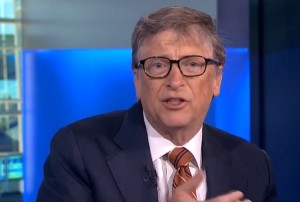 The United States Department of Justice and the FBI  reportedly had a new ally in their fight to compel Apple to help it unlock an iPhone that belonged to Syed Farook, one of the terrorists who carried out the San Bernardino mass shooting. The media ran with quotes from a Financial Times interview to report that Microsoft founder Bill Gates is taking the FBI’s side in the case. On Bloomberg TV Tuesday morning, however, Gates said he was “blindsided” by the reporting, and that it did not fully reflect his views:

Were you blindsided by the “backs FBI” headlines?

Gates: Yeah, I was disappointed because that does not state my view. I do believe with the right safeguards, I think there are some cases where the government, on our behalf, like stopping terrorism, which could get worse in the future, that that is valuable. But striking that balance — Certainly, the government has taken information historically and used it in ways that we do not expect, going all the way back to the FBI under J. Edgar Hoover. I am hoping now that we can have the discussion. I do believe there are sets of safeguards where the government should not have to be completely blind.

That’s not a big difference from what he said originally, although the news media has been focused on only part of what Gates said. Here’s what Gates told The Financial Times:

“It is no different than [the question of] should anybody ever have been able to tell the phone company to get information, should anybody be able to get at bank records. Let’s say the bank had tied a ribbon round the disk drive and said, ‘Don’t make me cut this ribbon because you’ll make me cut it many times’.”

…Mr Gates told the FT that there were benefits to the government being able to enforce taxation, stop crime and investigate terror threats, but said there must be rules on when the information can be accessed.

“I hope that we have that debate so that the safeguards are built and so people do not opt — and this will be country by country — [to say] it is better that the government does not have access to any information,” he said.

Those sound pretty similar, but Gates is obviously trying to set himself more squarely on the fence rather than be seen, by some, as a government stooge.

I think the issue that’s being missed here is that the courts ordering Apple to unlock the phone isn’t the horrible precedent some people are saying it would be, Apple unlocking it without a fight would be. As Gates appears to be saying, this specific case seems worthy of that action, but by forcing the higher courts to rule on it, Apple preserves their ability and credibility to fight the next, less worthy request.