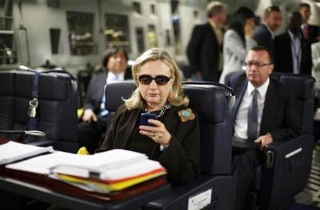 It may be 39 months away, but one thing is already abundantly clear about the next presidential election.

Hillary Clinton is the only brand name in the race.

As you may have heard, NBC and CNN are currently going ahead with a miniseries and documentary, respectively, on Mrs. Clinton. The NBC version will star Diane Lane, who, you know, constantly gets mistaken for the former first lady. And if the Peacock’s pom-poms for the current Democratic administration are any indication, this flick will be a 90-minute infomercial, portraying Hillary as a mix of Sarah Connor (the gritty underdog who keeps fighting), Clarice Starling (the resourceful heroine), and Dorothy Gale (the victim of her environment who eventually overcomes adversity) all at once.

The CNN version—a documentary, not a fictional tale—should be much more (for lack of a better term), fair and balanced. Morgan Spurlock is producing, and given his impressive work from Super Size Me to Inside Man he’s one of the few straight-shooters left in the business. Spurlock is, if anything, also impossibly meticulous with detail, and it can therefore be assured he won’t gloss over any of the many blemishes in the subject matter’s past.

As you also may have heard, the Republican National Committee is none too happy that Hillary—already the Miami Heat-like favorite to extend Democratic control of the White House to at least 12 years—is getting any kind of extended airtime regardless of what the final cut ends up looking like. Consequently, the RNC is now threatening to boycott both channels (via the party’s primary debates, which perform relatively well from a ratings perspective) if the documentary and movie aren’t cancelled within eight days.

Of course, the opposite effect will happen as a result of making—as Mediaite’s Josh Feldman rightly noted—an empty threat. The more protest, the more debate on all the cable networks and on print, the more publicity, the more of a chance of snow this weekend in DC before either of these projects get cancelled.

Of course, the GOP and its nominee will be just fine without NBC/MSNBC handling any debates. Even without the Hillary-movie controversy, it isn’t likely any major Republican is going to come within 100 yards of an MSNBC set in particular, especially when Chris Matthews treats his guests like this. In the end, the party can avoid NBC and even CNN (although dissing the latter will hurt much more when attempting to reach independents) by simply holding all of its debates in the more-friendly confines of Fox.

But to carry this protest into the realm of discussion for the next three years into 2016 will only strengthen the one role Hillary plays best:

So the only question remains: Is Hillary the ratings draw Barack Obama was in 2008 and was again as a sitting President running for re-election?

Yes, she’s popular, even despite Benghazi hearings that weren’t her finest moment. Yes, she’s on track (as she was in 2006) to become the first female president in U.S. history if her health allows her to handle the rigors of an increasingly-extended campaign. But by the time 2016 rolls around, Hillary will have been on the national stage for almost 25 years. Is there anything we already don’t know about her?

Mr. Obama was obviously fresh and electric in 2008. The aura around him from being such an exciting and new political figure was something like this country has never seen. In a related story, Clinton will be 69 on Election Day (Mr. Obama was only 47 when first elected). Hillary-fatigue may already be apparent on two fronts.

And by all accounts, Hillary isn’t the performer Mr. Obama is on the campaign trail…just ask anyone associated with her losing campaign in 2008. Then again, there will be Bill Clinton—running for what could be seen as a third term—on hand to ignite things both on the trail and in interviews on a daily basis. And that factor—the Bubba factor—is what makes Hillary too irresistible to pass up talking about now, even with about 1200 days until November 8, 2016.

Of course, with every great fight come a hero and a foil: Ali-Frasier. Tiger-Phil. JWoww-Sammy Sweetheart. Obama-Romney. So in order for Hillary to be cast as a savior by, say, MSNBC in the same way Mr. Obama was against the guy the network turned into Gordon Gekko last year, a stark contrast from the GOP side will be needed.

Sarah Palin would be an absolute dream for the likes of Rachel Maddow and Matthews to pummel in primetime, but that obviously ain’t happening. Jeb Bush would be the next best thing given the “Do we really want another Bush in the White House?” theme, complete with endless segments ideas rehashing all of the lowlights of the Bush 41 (whom even liberal media respects) and Bush 43 (whom liberal media loathes more than any leader in history).

Rand Paul, Marco Rubio, Ted Cruz…none will have a Hollywood actor playing them in an NBC movie any time soon. That leaves Chris Christie, who if anything else is as close to a brand name the Republican party has right now. Only problem: Conservatives in the media like Sean Hannity and Mark Levin aren’t putting Christie ’16 bumper stickers on their cars anytime soon.

And therein lies the rub. The Republican establishment can scream all it wants about Hillary and Diane Lane. But as Mediaite’s Noah Rothman also argues, it’s not NBC’s or CNN’s fault that Mrs. Clinton is the only ratings-generator in town whose nomination won’t get derailed internally. It’s not their fault that she’s relatively popular, that she attracts more eyeballs than any of her rivals (which isn’t very hard)…even if she isn’t the electric candidate Mr. Obama was five years ago or even last year.

In the end, this still doesn’t mean another Clinton Presidency is inevitable, no matter what narrative many in the media is already pushing (See: The GOP is fractured; Clinton is unbeatable). She lost badly to an inexperienced candidate five years ago. She has no signature achievements as a Senator or Secretary of State. She hasn’t exactly been a picture of health in the past year. And maybe the country isn’t thrilled with royal families running the country for the better part of three decades (Bush 41, Bill Clinton, Bush 43, Hillary Clinton).

If the GOP had a clue on this one, they would have ignored the Hillary spotlight provided by NBC and CNN.

And if they eventually capitulate on an already-punchless boycott threat, they’ll also look this way too: