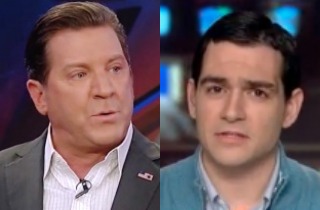 It might not come as a surprise that staunch Donald Trump defender Eric Bolling supported his 9/11 claims by saying on The Five yesterday that Muslims did celebrate the attacks, and their precise numbers and location are inconsequential.

What happened later, however, was that Bolling got in an online shouting match with a Buzzfeed reporter who took Bolling to task on his claims that Muslims were forewarned about the attacks so that they could watch the Twin Towers come down for themselves.

“I remember specifically the news reports about Jersey City. They said people were on the roofs watching the planes fly in,” Bolling said. “They were tipped off prior to the thing. And this was a narrative that was going on. I remember video. I don’t remember if it was Pakistan or Paterson.”

Bolling also referenced how the 1993 World Trade Center bombing at the time by saying he saw Muslims cheering that event worldwide when he used to work there as a commodities trader.

Later on, Andrew Kaczynski wrote a series of tweets critiquing Bolling’s suggestion that Muslims were warned so they could watch from the rooftops, all while numerous fact-checkers have refuted Trump’s claims about massive celebrations being had:

“They were on the rooftops watching (planes hit the WTC). They were tipped off prior to the thing.” WHAT!? https://t.co/uYDFYwkv5C

Did this mofo really just say U.S. muslims were tipped off about planes hitting the WTC to watch it on their roofs https://t.co/uYDFYwkv5C

Here’s the longer video of @ericbolling claiming U.S. Muslims were tipped off about 9.11 to watch on their rooftops. https://t.co/l5nMBLhPqP

Needless to say, Bolling was less-than-pleased with this:

Questioning me on 9/11 is a fools game.. BTW where were you that morning and how many close friends did you lose? https://t.co/tCNNpmNaa4

Oh that’s right you were in 7th grade. https://t.co/IDn4ZAUjZ0

I was in 6th grade. That doesn’t give you a license to make stuff up. https://t.co/dxTTJjotOB

NOTHING is made up you juvenile hack reporter. NOTHING! https://t.co/SEQsjFEqyt

Quite notably, however, Bolling ended things by citing a Fox News article that floated a 9/11 conspiracy theory suggesting that Israeli intelligence agents also knew about the events, and set up cameras to film it.

Read this.. or the last paragraph. https://t.co/6L77va2WtY
Are you claiming NYT is not a credible news source? https://t.co/rk9af3iqFV

The report also describes how five Israeli men (not Muslims) were detained after the attack, and the article has been linked to theories of Israel’s involvement in the attack.