Book of the Times: NYT Review of Hitler Biography Is an Apparent Critique of Trump

Book of the Times: NYT Review of Hitler Biography Is an Apparent Critique of Trump 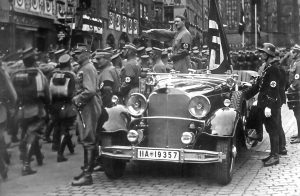 She didn’t need to. The parallels between the “pathetic dunderhead” who became a dictator and the Republican presidential candidate are apparent from the opening paragraph:

How did Adolf Hitler — described by one eminent magazine editor in 1930 as a “half-insane rascal,” a “pathetic dunderhead,” a “nowhere fool,” a “big mouth” — rise to power in the land of Goethe and Beethoven? What persuaded millions of ordinary Germans to embrace him and his doctrine of hatred? How did this “most unlikely pretender to high state office” achieve absolute power in a once democratic country and set it on a course of monstrous horror?

Mr. Ullrich offers a fascinating Shakespearean parable about how the confluence of circumstance, chance, a ruthless individual and the willful blindness of others can transform a country — and, in Hitler’s case, lead to an unimaginable nightmare for the world.

The review is structured has a list of bullet-points explicating how a narcissistic “clown” became a fascist dictator. The review notes Ullrich’s descriptions of Hitler’s attributes and tactics including:

Washington Post‘s Aaron Blake drew direct comparisons between the descriptions of Hitler presented in the review and our current national moment. But the Times says that the review speaks for itself.

You can read it in its entirety here.