Breaking: Next RNC Chair Will Oppose Gay Marriage (No Offense) 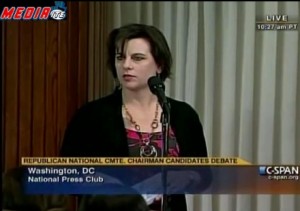 While many were offended by MSNBC’s Cenk Uygur‘s laughter at GOProud Chairman Christopher Barron‘s claim that the Republican Party is welcoming to gay people, today’s RNC Chair candidates’ debate provided a sobering contrast to the progress that people like Barron see. Asked if they support the anti-gay National Organization for Marriage‘s position on marriage, all five answered affirmatively, with varying degrees of lip service to the “individuality” and “dignity” of gay people, the classic “No offense, but you’re not equal.”

Interestingly, it was incumbent Michael Steele who treaded most lightly on the topic, saying he believed that marriage is between a man and a woman “not to the exclusion of anybody.”

While nonsensically contradictory, Steele’s response does represent a considerable softening of the position he took early in his term as RNC Chairman, when he called support for Civil Unions “crazy.” This, despite the fact that 59% of Republicans believe gays deserve such recognition, or better.

All five candidates couched their opposition to gay marriage in the same kind of disclamatory language, but still pledged obeisance to NOM. I suppose this is what passes for progress in the GOP where gays are concerned: (From C-Span)

While GOProud has made progress within the conservative movement, particularly with young conservatives, the wheels come off the “welcome wagon” when it comes time to actually grant them equal status as human beings. As Uygur pointed out, the repeal of DADT was carried across the goal line by Democrats, with a tiny minority of Republican support, and the picture for marriage equality is much more bleak.

To be fair, there are plenty of Democrats who don’t support full marriage equality, but they also don’t favor banning gay marriage, and they’re miles ahead of the GOP on this issue. President Obama, whose position on marriage equality is often used for cover by Republicans, recently indicated that his position is “evolving,” a development that promises to put even more daylight between the Dems and the GOP.

What’s really at work here, I think, is the difference between what many conservatives actually believe, and what they can say out loud. Marriage equality seems like an inevitability at this point, but in the GOP, being early to that party is political suicide.