Buckle Up America: Trump is Our Berlusconi and We Are All Italians Now
Opinion

Buckle Up America: Trump is Our Berlusconi and We Are All Italians Now 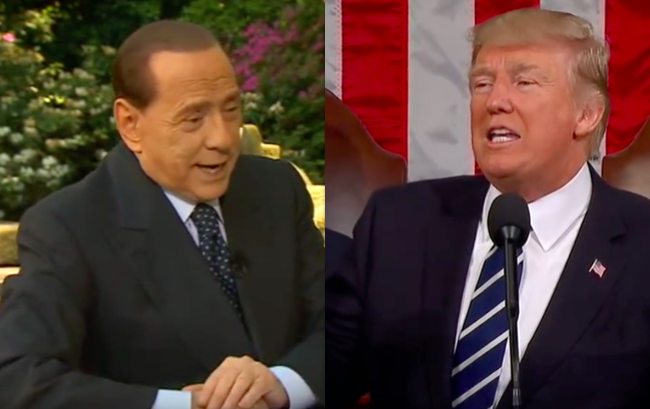 Earlier this month, President Donald Trump addressed members of the United States Navy from aboard the U.S.S. Gerald Ford. Ditching his usual suit and tie (and scotch tape) for a naval jacket, the president reiterated his promise for large increases in military spending. The performance was somewhere between George W. Bush’s Mission Accomplished speech and the Michael Dukakis tank.

In truth however, the Donald Trump show which began in June 2015 evokes neither Bush or Dukakis or, for that matter, any previous figure in American politics. Trump is the American Silvio Berlusconi. In both bluster and brashness and acute political skill, the rise of the Italian magnate offers both a tantalizing analogue of our times and a roadmap for where things may be headed.

The character and governing similarities between Trump and Berlusconi are striking. Both are billionaires who have been dogged by claims of womanizing. Trump had his Access Hollywood tape and Alicia Machado, and Berlusconi had that time he thought it was a good idea to randomly dry hump a female police officer in broad daylight.

The two men also share a disdain for political correctness and often say things that draw scorn from media and liberals, but private concurrence from large swaths of ordinary citizens. Trump’s frequent broadsides against Islam or Mexicans aren’t that far off from Berlusconi’s own past claims that western civilization was superior to those in Muslim countries.

Both, too, go above and beyond a normal politician to influence media coverage.

“Many journalists were complicit even without being controlled, for example by accepting conditions, or when [Berlusconi] chose journalists he preferred for interviews,” the Italain journalist Jacopo Iacobon told La Stampa, The Guardian reported.

Berlusconi is certainly a consummate salesman, and a very well-prepared one. But he is also, and probably above all, a buyer of commodities and services, of villas and footballers, of television channels and entertainers, of supermarkets and publishing houses, and much else besides. His is a patrimonial and acquisitive instinct, fired by the production and the use of wealth, as well as the need for his name and face to be omnipresent. In this respect, though not in others, he can be compared to a figure like Donald Trump, who used to boast that he had the largest living room in New York and the city’s most spectacular view.

Berlusconi, himself, agreed, telling an Italian newspaper last year that the parallels between him and Trump were “obvious.”

Despite howls from the Italian left and the professionally offended class, Berlusconi served as Prime Minister for nine years over four terms. It was an impressive run, and one that bodes well for Trump if his adversaries make the same mistake Berlusconi’s did.

That mistake, namely, would be to treat Trump as an anomaly. While the U.S. real estate magnate frequently touted his outsider status and business acumen, as President of the United States he cannot help becoming a ‘politician’ — and gaining all the baggage that comes with it. As Hillary Clinton painfully demonstrated, running a campaign of perennial pearl-clutching at every latest outrage was a road to defeat. Taking on Trump in the future will require attacking the policies and ideas that come from his administration and not the daily carnival of outrage on Twitter and elsewhere.

As Luigi Zingales, a professor at the University of Chicago Booth School of Business, pointed out last year in the New York Times, it was this approach that ultimately felled Trump’s Italian counterpart.

“Only two men in Italy have won an electoral competition against Mr. Berlusconi: Romano Prodi, and the current prime minister, Matteo Renzi,” wrote Zingales. “Both of them treated Mr. Berlusconi as an ordinary opponent. They focused on the issues, not on his character. In different ways, both of them are seen as outsiders, not as members of what in Italy is defined as the political caste.”

During the 2016 campaign, many accused Donald Trump of running a campaign less about issues and more about his cult of personality, but — believe it or not — the issue-free approach to campaigning was even more endemic on Team Clinton, according to a recent study by the Wesleyan Media Project.

A breakdown of the study reported by Vox found that:

About 70 percent of Trump’s ads ‘contained at least some discussion of policy.’ About 90 percent of Clinton’s attack ads went after Trump as an individual — compared with just 10 percent that went after his policies.

Whether you are for or against Trump, there can be no debate that the virtue-signaling and faux-outrage of his critics is the surest road to his reelection victory in 2020.