Chris Matthews: Unlike MSNBC and CNN ‘There’s Absolutely No Debate’ on Fox News 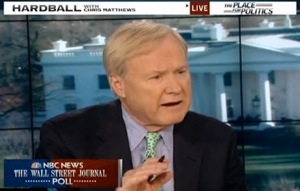 As the heath care debate begins to wrap up, its not just the politician’s rhetoric that has reached a fever pitch; the cable news channels are starting to throw barbs at one another. Last night MSNBC host Chris Matthews was discussing health care reform with NBC political analyst Chuck Todd and took a broad swipe at the health care coverage by Fox News, asking “has there ever been a bill before in congress where an entire network on television has blasted it every day for more than a year?”

Speaking on his own show Hardball that appears on MSNBC, Matthews said, “if you listen to this network there is a lot of debate on MSNBC about this health care bill – left versus center-left, whatever…for it or against it, there are all points. Same with CNN. But there is a network out there, Fox News, that has offered absolutely no debate, its just trashed every single thing…has there ever been a bill before in congress where an entire network on television has blasted it every day for more than a year?”

For his part, Todd (wisely?) demurred and spoke about the focus and engagement on the legislative “process” at MSNBC, but astutely pointed out that the public is hearing two messages (MSNBC and Fox News.) However, there are very few viewers that consume opinion media on both networks — and judging purely by ratings points and total viewers, Fox News has clearly won this debate, and perhaps successfully killed this administration’s efforts to reform health care.

(h/t to commenter MichelleF for pointing out the clip.)