Chuck Hagel: The White House Tried to ‘Destroy’ Me After I Resigned

Chuck Hagel: The White House Tried to ‘Destroy’ Me After I Resigned 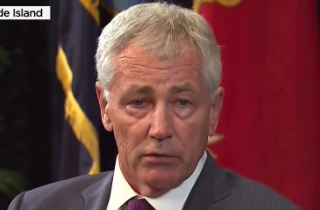 Former Secretary of Defense Chuck Hagel is accusing the White House of micromanaging his department and attempting to ruin his reputation after he critiqued President Obama‘s military judgment.

Foreign Policy published an extended interview with Hagel today, in which commented on how he was forced to resign after Obama administration officials said that combatting ISIS required someone else’s skills. Hagel was Obama’s third Secretary of Defense to criticize how the president managed Pentagon business, and Hagel said that anonymous White House staffers made up stories to vilify him as he left office.

“They already had my resignation, so what was the point of just continuing to try to destroy me,” Hagel asked himself in the interview. “I don’t know what the purpose was. To this day, I’m still mystified by that. But I move forward. I’m proud of my service.”

Hagel’s resignation came soon after Obama told him to stand down after coming up with a plan for a full scale response to Syrian dictator Bashar al-Assad‘s use of chemical weapons. Hagel also had concerns with other staffers about their national security efforts, saying there were too many unproductive meetings where important issues always got deferred or shot down by people in attendance.

“Whether it was the right decision or not, history will determine that,” Hagel said. “There’s no question in my mind that it hurt the credibility of the president’s word when this occurred.”