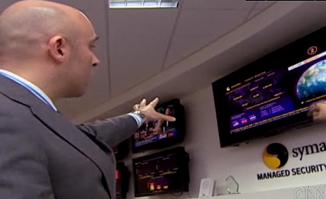 The Climategate affair continues to move from fringe Internet cause to mainstream debate. Case in point: CNN is talking about it more and more. The network is often accused of waffling in its reporting and failing to come to strong conclusions — and this accusation, in turn, is often linked to CNN’s disappointing ratings.

But their latest piece on the hackers behind Climategate was anything but waffly: it was, in the lingo of climate change skeptics, ‘warmist,’ all but putting its foot down and calling global warming an undisputed fact.

Oddly, the segment did not actually quote the emails, though a bit of one briefly flitted by on the screen as a reporter commented that “key words like ‘trick’ were as valuable as jewels.” The one note of skepticism came from Senator John Barrasso, who criticized green measures as an unnecessary investment that would hurt America’s job market even more.

On the one hand, CNN is right: whether or not specific political measures like cap-and-trade or declaring carbon dioxide a pollutant are bad ideas, anthropogenic global warming is the scientific consensus, Climategate e-mails or no, and it would be irresponsible reporting to pretend that both sides of the debate are perfectly equal when they clearly aren’t. CNN didn’t waffle here, and that’s a good thing.

On the other hand, giving short shrift to critics’ arguments isn’t the way to go either. There are plenty of bad reasons not to believe in global warming — the mere fact that a handful of emails leaked is one of them — but the debate is a real one, and brushing off all climate skeptics as uninformed yobbos could become a self-fulfilling prophecy. Better to have that debate take place out in the mainstream than on agenda-driven message boards. Sweeping it under the rug hasn’t done anything to keep millions of Americans from turning on global warming.

This Information Is Beautiful graphic on global warming does a fantastic job of presenting both sides’ ways to interpret some of the key graphs in clear language and showing what the debate is actually about, while still making clear that the side that believes in global warming is the “consensus.” The Climategate hackers showcased in the CNN segment have succeeded in launching a debate about global warming: better to have that debate in the open.