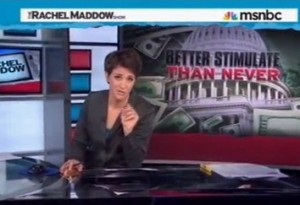 A casual ad lib from Friday night’s The Rachel Maddow Show has conservative blogs triumphantly calling host Rachel Maddow an “apparent closet racist” and wondering if their own fellow travelers could get away with calling President Obama a “boy king.”

Of course, Maddow’s remark, in context, an affectionate comment about how the presidency has aged Barack Obama, wasn’t a racist jab, but this is really not about her. It’s about the right trying to obtain a permission slip to call the President “boy.”

To be clear, I am not saying that the term “boy king” is an affectionate one. It isn’t. The earlier context makes clear Maddow’s intent, but it was a clumsy ad lib, one that she probably wouldn’t make again, and one that ought to address when she gets the chance.

Newsbusters‘ Jack Coleman is obviously being sarcastic when he calls Maddow a “closet racist,” his real point being to draw an equivalence between this clip, in which Rachel Maddow makes a clear reference to then-President-Elect Barack Obama’s youthful appearance, and remarks by conservative race-baiter Rush Limbaugh: (from MSNBC)

Breitbart bloggers also wonder, alternately, if Bill O’Reilly or Rush Limbaugh could get away with this. Their premise obviously depends on the impossibility that Limbaugh would ever make an affectionate reference of any kind about Obama. It’s a silly question, even if you accept the premise, because Limbaugh “gets away with” far worse.

That’s part of the white privilege of never having to be racially demeaned by being called “boy.” It’s easy to tell someone to stop being so sensitive about something you’ll never have to experience.

Additionally, there will always be plenty of other white privilege deniers who will worship you for doing it, while even decent conservatives either turn a blind eye, or defend you, for fear of being drummed out of the club. It’s certainly a lot easier than actually paying attention to what you’re saying. There’s no consequence for race-baiting in conservative America, unless you’re wearing a white sheet and screaming the n-word, and even then, only if there’s video.

That’s the part that sickens me the most, people that I actually like, and respect, pretending they don’t know the difference between Maddow’s remark, and the historically demeaning use of the term “boy” as a (not really) coded slur. Here’s the news, folks: you don’t need a permission slip to call President Obama “boy” (although I can write you one, if you’d like). This is America, you can call him whatever you want. It’s a free country. You’re even free to high-five yourselves over your awesome Maddow comparison. Just know that it says more about you than it does about Barack Obama, or Rachel Maddow.