Did Bloomberg Win Re-Election Because The NYT Couldn’t Afford Their Own Poll?

Did Bloomberg Win Re-Election Because The NYT Couldn’t Afford Their Own Poll? 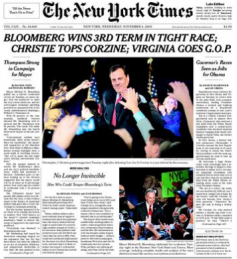 After a year or so of non-stop talk about the death of print and the possible ramifications thereof, we may finally be seeing some real-world results of what happens when newspapers (i.e. newsrooms) do not have the budget to perform some basic functions.

The case is point is this month’s re-election of Michael Bloomberg, who skated through to victory with a surprisingly narrow margin over an opponent most people knew very little about. The results were so close (and surprising) that both the NYT and MSNBC called the results early and then had to recall them. Now readers are beating down Times‘ public editor Clark Hoyt’s door wanting to know how come the results were such a surprise, where was the reporting!? One of the answers appears to be the sort of amazing disclosure that Times couldn’t afford to do their own polling. From the article:

The paper did not do its own polling in the fall. Janet Elder, the editor in charge of polling, said it was a budget-driven decision that still upsets her. In The Times’s only poll, in June, a majority of those responding said they wanted someone else as mayor, even though Bloomberg faced no formal challenger at that point and there was broad approval of his performance in office.

In the absence of its own later poll, The Times was left with those of others, which it treated quite differently on its Web site and in the printed newspaper. On the City Room blog, the paper reported extensively on surveys by two respected organizations, the Marist Institute for Public Opinion and the Quinnipiac University Polling Institute, whose director, Maurice Carroll, a former Times reporter, said in late October, “It looks like a Bloomberg blowout.”

In their press releases, Marist and Quinnipiac emphasized the gap between the candidates, which was as high as 18 points in Quinnipiac’s polls. That gap got headlines on the Times Web site. The printed paper did not carry full articles on the polls and did not name them, referring only to Bloomberg’s lead or Thompson’s poor showing in “polls.” Had The Times put less emphasis on the spread and more on the fact that Bloomberg was stuck at roughly 50 percent, readers would have been better served.

Lee Miringoff, the director of the Marist Institute, said he tried to warn reporters at a news conference — which The Times didn’t attend — that the race would be closer. Carroll pointed to a caution in his “blowout” press release that said such races tend to tighten.

So a couple of conclusions here: One, the NYT is far more willing to give important print space to their own internal polls, which in this case they couldn’t afford, meaning details of the polling were perhaps less than ideally covered in print. Two, based on the results, readers apparently still place more trust in the printed version of the news than they do in the online version, even if the online version is the better reported of the two. Also, the NYT is apparently as susceptible to eye-catching headlines as the rest of us.

Would Bloomberg have lost had the NYT done more rigorous vetting of the results? Perhaps. Of course, perhaps the city would have instead paid slightly more attention to his opponent Bill Thompson and concluded better the (experienced) devil you know. Either way, the results of diminished newsrooms are good for no one except those benefit from a softer spotlight.