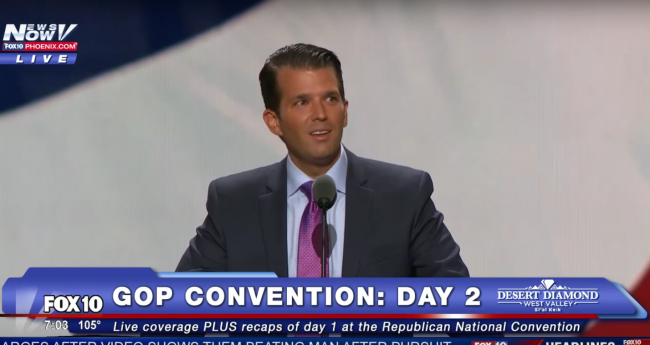 In the wake of former Georgia secretary of state Karen Handel‘s narrow victory in a tight Congressional race against John Ossoff, Donald Trump, Jr. took to Twitter to congratulate Handel on her oh-so feminist victory in becoming the “first woman Rep. Georgia has sent to Congress.”

He also expressed his befuddlement over why, as a woman, Handel wasn’t being honored by celebratory “glass ceiling stories.”

“Do conservatives not get them?” he mused.

Karen Handel becomes 1st Woman Rep GA has sent to Congress. Still waiting for the glass ceiling stories, or do conservatives not get them?

As writer Alyssa Hertzig put it, “Sorry. It’s just kind of hard to get excited about a woman who wants to gleefully rip health care access away from other women.”

Sorry. It's just kind of hard to get excited about a woman who wants to gleefully rip health care away from other women.

A closer look at policies Handel supports reveals she goes far beyond the run-of-the-mill Republican’s classic War on Women tactics. Defund Planned Parenthood and deny women access to birth control that grants them bodily autonomy, and deny them breast cancer screenings and other crucial services, sure. But on top of that, here’s a little known fact: Handel is hellbent on imposing policies that could literally result in women being killed and maimed.

“Life begins at conception, and I believe that abortion under any circumstances is morally wrong. An America where all abortions are viewed as abhorrent and unthinkable in any situation is one we must all aspire to and work towards.”

Stigmatizing women for having a basic medical procedure that, let’s face it, could have been prevented if they had had birth control and sexual health education (you know, the things women get when Planned Parenthood receives funding), not to mention humanizing fertilized eggs at the expense of living, very human women, is pretty anti-woman, sure.

But Handel’s yearning for a society in which abortion is a crime is plain scary. The United States is already grappling with terrifying maternal mortality rates, with 9.2 pregnancy-related deaths per 100,000 births — more than in any other developed country — and only in the United States has this rate been rising, according to NPR.

And abroad, where abortion is a crime (not just virtually inaccessible due to myriad restrictions, like in the United States), lack of choice results in women being forced to seek out dangerous, covert methods that result in frightening rates of injury and death. With some 50,000 women dying of unsafe abortions every year, there’s a reason the United Nations has recognized abortion as a human right. (But sure, Karen, do keep calling yourself “pro-life.”)

An El Salvadorian activist also noted last month that women in countries where abortion is illegal are “also reluctant to seek post-operative medical care after their abortions have taken place,” for fear of being jailed, putting them in greater risk.

When abortion is a crime, as Karen Handel wants it to be, just as when the procedure is heavily restricted, abortions still happen — women’s health, safety and dignity are just put on the back burner. There’s no such thing as society free of abortion, a procedure as old as pregnancy — there’s only society free of safe abortion.

So, how can we celebrate the victory of a woman who would see other women die to uphold her personal notions of moral superiority as the shattering of a glass ceiling? How can we celebrate Karen Handel when her insistence on cutting funding for family planning resources — which allow women to pursue education and careers on equal footing with men, allow women to shatter their own glass ceilings — as a feminist victory?

Put simply, we can’t. Handel’s victory is nearly as far from a win for women as the election of Donald Trump and Mike Pence was in November.

And, hey, Donald Trump, Jr., just a thought — maybe your imagined “””War on Conservative Women””” will end when conservative women end their war on all women’s bodies?