Trump Literally Wants to Do Unspeakable Things and America Loves It 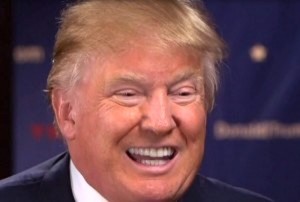 President Obama took to the airwaves Sunday night for a rare prime-time Oval Office address that aimed to quiet the fear and anxiety that have arisen in the wake of the San Bernardino killings and the attacks in Paris, France. Obama called the shootings in San Bernardino an “act of terror,” outlined his strategy to take on ISIS at home and abroad, and called for Congress to act on gun control measures.

Lost in all the coverage of the poorly-received speech was a portion of the address that appeared to be aimed at critics who say the President refuses to acknowledge the role of “radical Islam” in the attacks that have everyone so terrorized. In a rare move, the President called on moderate Muslims to take responsibility for the ideology that has fomented these attacks, and to go beyond merely denouncing violence:

If we’re to succeed in defeating terrorism we must enlist Muslim communities as some of our strongest allies, rather than push them away through suspicion and hate.

That does not mean denying the fact that an extremist ideology has spread within some Muslim communities. This is a real problem that Muslims must confront, without excuse. Muslim leaders here and around the globe have to continue working with us to decisively and unequivocally reject the hateful ideology that groups like ISIL and al Qaeda promote; to speak out against not just acts of violence, but also those interpretations of Islam that are incompatible with the values of religious tolerance, mutual respect, and human dignity.

Of course it received very little notice from the lunatics who won’t be satisfied until Obama uses their exact catchphrase, but it puts him a lot closer to the Bill Maher/Sam Harris camp than say, Reza Aslan. While continuing to say that ISIS doesn’t represent Islam, President Obama is explicitly calling this threat a Muslim problem.

I’m not sure how Muslims are supposed to feel about that (I doubt Christians would appreciate being handed the Planned Parenthood shooting to solve), but the President’s remarks seem squarely aimed at those Americans who are very jittery about terrorism, but who aren’t quite the lunatics that Republicans are. He was proposing a bargain in which he trades an acknowledgement of their anxieties about Islam for their resistance of paranoia and discrimination.

The problem is that President Obama is selling a product that can’t compete. He’s offering proper nutrition, ample rest, and exercise next to a rack full of 5 Hour Energy and herbal boner pills. Ted Cruz is having a moment right now in Iowa, partially on the strength of his desire to “carpet bomb” Syria (a sentiment widely shared even by the “moderate” right), and even the Republicans’ weakest, nice-guy candidate thinks our biggest problem is that we’re trying too hard not to kill civilians.

But if you doubt the marketability of bloodlust in a panicked America, look no further than Donald Trump, who leads the GOP field by a mile, and who literally wants to do unspeakable things to combat terrorism. That’s saying a lot, because there is very little that Donald Trump is unwilling to say. On several occasions recently, the things that Donald Trump has planned for fighting terrorism at home have been too awful for even him to say, and he’s on record supporting waterboarding.

On Friday, at a rally that was fraught with interruptions from protesters, Trump told an audience member who asked him how he would respond to the San Bernadino shooting that he couldn’t tell her, because he’d get into trouble with the press:

“You don’t want to hear how I’d handle it. I would get myself in so much trouble with them, we are going to handle it so tough.”

Lest you think Trump was just talking about proven terrorists, and/or that he just couldn’t bring something to mind in that moment, he took things a step further over the weekend. On Sunday’s Face the Nation, Trump reiterated his call to “go after the families” of terrorist, even singling out an American citizen who is not suspected of anything, and instead of just refusing to say what he would do, invited the viewer to fill in the blanks (emphasis mine):

TRUMP: Well, I would go after — well, at least I would certainly go after the wives who absolutely knew what was happening.

And I guess your definition of what I would do, I’m going to leave that to your imagination. But I will tell you I would be very tough on families, because the families know what is happening.

…DICKERSON: But his sister said she didn’t know what was going on. She was crestfallen for the victims here.

DICKERSON: You don’t believe the sister.

DICKERSON: So, you would go after her?

TRUMP: I would go after a lot of people, and I would find out whether or not they knew. I would be able to find out, because I don’t believe the sister.

…DICKERSON: You don’t think there’s a worry, a tension, if you go too far, that you end up creating more terrorists?

Now, Syed Farook’s sister Saira Khan is not suspected of anything, and has repeatedly said that she knew nothing of her brother’s plans, yet Donald Trump is saying that he would “go after” her using methods only bound by imagination.

For a too-large number of Americans, the unease that accompanies the existence of terrorism in the world is too much to bear, and they will do almost anything to make it stop, even the unspeakable, even by Donald Trump’s standard of speakability. I know that feeling all too well, because I felt it on September 11 as I watched the first tower fall, the feeling that you’d do almost anything to make that existential vulnerability go away. That’s the feeling that President Obama was trying to assuage Sunday night, but Trump is promising something that Obama can’t, the satisfaction of a bloodlust that has been growing for 14 years.

He’s also promising to carry out this retribution on any Muslim whom he doesn’t deem trustworthy, which is the secret ingredient in the “radical Islam” sauce. Republicans will say that they’re not talking about all Muslims when they say “radical Islam,” but what they are saying is that even if all Muslims aren’t terrorists, you never know which ones are, and you certainly can’t take their word for it.

The most frightening thing is that Trump’s message isn’t just selling to Republicans. In general election polls, Hillary Clinton is barely eking out a lead against him, and they’ve only just begin to register this latest wave of panic. The good news is that Hillary Clinton has enough hawkish cred that she might be able to overcome Trump based on his overall clownishness, but the bad news is that the tough talk she’ll have to engage in could alienate the kind of emoprog voter who stays home because everybody is Just Like Bush™.

Whoever our next president is, they are going to have to deal with an American public that is out for blood, and in the current landscape, that puts Donald Trump at a distinct, terrifying advantage.