Everyone, Please Stop The Outrage Over U.S. Olympic Uniforms Made In China

Everyone, Please Stop The Outrage Over U.S. Olympic Uniforms Made In China 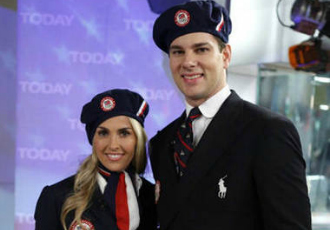 If you’ve turned on the TV today or read any newspapers or blogs, you’ve probably seen the overflowing outrage over the fact that the U.S. Olympic team’s goofy-looking outfits were manufactured in China.

The outrage has been “the great uniter”: TV personalities from Fox News’ Bob Beckel to CNN’s Soledad O’Brien to MSNBC’s Rachel Maddow have all expressed disgust over the uniforms.

And politicians, left and right, took to their favorite pastime — standing before a camera — to denounce uniform designer Ralph Lauren and the privately-owned U.S. Olympic Committee for their shameful actions.

– RELATED: Olympic Uniformgate Continues With Report That Team USA’s Uniforms Are Made In China

Apparently he thinks it would be better “if they have to wear nothing but a singlet that says USA on it, painted by hand, then that’s what they should wear” instead of wearing something made by those evil Chinese.

Everyone seems to agree: if you’re going to officially represent and celebrate America, then you should be wearing clothing made right here in the United States.

Please, everyone: Stop the selective outrage.

Put aside the fact that the manufacture of uniforms never seemed to matter during previous Olympics, and that the USOC is a privately-owned company that can do as it pleases. Remember last week, on the Fourth of July, when you were running around with sparklers, wearing or flying fabrics with the American flag imprinted, and shooting off fireworks in the name of your country’s independence? Well, most of those items were probably made in China.

– RELATED: Bob Beckel On Olympic Uniform Controversy: ‘I Don’t Trust [The Chinese] Worth A Damn’

Furthermore, we send Secretary of State Hillary Clinton and a slew of ambassadors all around the world to officially represent American interests. Are they often wearing foreign-made clothing and accessories? You bet. Olympians represent our nation at an athletics exhibition every two years; ambassadors represent our nation in delicate national security matters every day. Selective outrage much?

There’s also the economic outrage that the U.S. Olympic Committee put lower costs and “profits before patriotism” by outsourcing the manufacture to Chinese workers. So what, are we only supposed to care about American workers? China’s poor aren’t “worth a damn”? That’s really progressive.

Besides, as some might quip: What could be more American than having our uniforms made by Chinese workers?