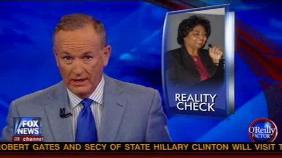 Many people from MSNBC’s Keith Olbermann to Shirley Sherrod herself have implied Fox News was a driving force behind propping up Andrew Breitbart‘s out-of-context video that forced her to resign.

A more correct assessment might be that the fear of FNC’s coverage forced her resignation – but FNC’s actual coverage did not, and the evidence is clear.

Both the Los Angeles Times and the Washington Post write about a directive from Fox Senior Vice President Michael Clemente for the news hours of FNC to check the story out before devoting any time to it. “Let’s make sure we do this right,” he said.

Which is why there is no mention of the story until the last 15 minutes of Bill O’Reilly‘s 8pmET O’Reilly Factor – notably, a non-news program. (I will say, WaPo‘s designation of O’Reilly as “not part of the news division” is probably a little extreme. He is on “Fox News”.) After that 8pmET appearance – O’Reilly does tape his show a couple hours earlier – the video aired on FNC’s two other prime time shows, with Sean Hannity and Dana Perino (in for Greta Van Susteren) devoting some time to it. Even Media Matters, in their documentation of how FNC disseminated the story, notes its infrequent appearances on Monday – considering the story broke on Big Government at 8amET.

And that doesn’t mean FNC was the only one to mention the story Monday night either. It was referenced by a guest on Larry King Live, and Anderson Cooper did have a brief segment as well on CNN. By Tuesday morning, all three cable networks were leading with the Sherrod video. FoxNews.com had a story up before anything aired on the network (after she had resigned – Update: An emailer points out this line from the story: “The Agriculture Department announced Monday, shortly after FoxNews.com published its initial report on the video, that Sherrod had resigned.” Clearly this means there was a previous FoxNews.com story up just based on the video, before the resignation.), but so did other mainstream outlets, like the Atlanta Journal Constitution. The AJC was also first to advance the story, with comment from Sherrod, that led to its eventual unraveling.

On Tuesday, FNC covered the story a lot – 39 times according to TV Eyes. MSNBC covered it 21 times, but CNN? They mentioned Shirley Sherrod 63 times. Now there will be an argument made about the tone of the coverage, but as the story evolved throughout the day, it shifted so much it had Glenn Beck, the cable news host near the center of the controversy to begin with, coming out with an enormous defense of the former USDA worker. This was a point made today in a, gasp, New York Times editorial:

By the time the conservative commentator took up the issue, the full transcript of the speech was out and Mr. Beck was citing Ms. Sherrod — but as a victim of administration recklessness. This time, he was right.

NEXT PAGE: Breitbart Deserves Blame…How About The Rest Of The Media?