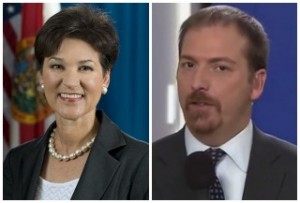 You’d figure most candidates would jump at the chance to give their local election some national attention, but Florida Democrat Alex Sink would really rather not. NBC’s Chuck Todd offered to host a debate between Sink and her Republican opponent David Jolly. Jolly agreed. Sink did not.

Organizers for the event, being held at the Clearwater Regional Chamber of Commerce, agreed to have Todd moderate the debate, but Sink refused to do it under those conditions. Why? Well, it may have been that she really doesn’t want the national spotlight right now.

As she’s come under fierce assault from Republicans who’ve spent millions of dollars on TV ads casting her as a supporter of President Barack Obama and his unpopular health care law, Sink’s aggressively tried to turn attention to local issues such as the rising cost of flood insurance premiums. Todd, who caters to a national audience, could have thrown a wrench into her strategy by focusing his questions on issues such as Obamacare.

The president of the Clearwater chamber said the NBC offer is “totally off the table” right now. A Sink spokesperson said they had agreed to a forum with a “local moderator and with questions from the audience,” claiming they were blindsided by the NBC offer.

Meanwhile, a Jolly spokesperson provided a mocking statement about Sink’s conditions for the debate, saying, “What will she ask for next?… A teleprompter or for one of her handlers just to do the debate for her?”