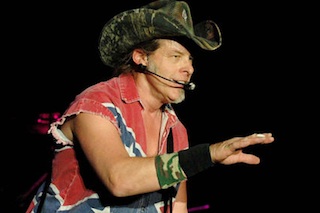 Nugent sparked a firestorm of controversy after he appeared at a St. Louis National Rifle Association conference and said that he would be “dead or in jail” if Obama won a second term. He also said that he hoped voters would “chop [Democrats] heads off in November.”

“Your goal should be to get a couple thousand, per person who’s here, to vote for Mitt Romney in November,” Nugent told an applauding audience of NRA members.

Nugent also sharply denounced President Obama, who he described as leading a “vile, evil America-hating administration” which is “wiping its ass with the Constitution.”

Nugent, who is a passionate advocate of Second Amendment rights, attacked the Supreme Court of the United States as well.

Several commentators have called for the imprisonment of Nugent due to the implicit threats of his comments. The Secret Service, however, appears to consider the matter closed.