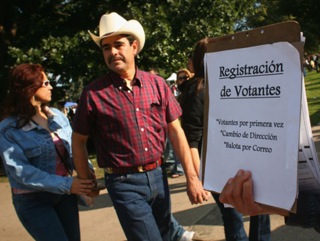 A new poll from Fox News Latino released today is proving what many pundits have predicted for some time about the 2012 election: for Republicans, it will be an uphill battle, and a Latino on the ticket would help. But as with many surveys, the devil lies in the details– namely, the finding that Latin American voters of all stripes are concerned with jobs, the economy, and education far more than with immigration.

Aside from the full slate of data on each candidate, the key bit of horserace coverage information is that President Obama is head and shoulders above the Republican candidates as a whole, and Mitt Romney has a strong lead among the four remaining Republican hopefuls:

The national poll of likely Latino voters indicated that 73 percent of them approved of Obama’s performance in office, with over half those questioned looking favorably upon his handling of the healthcare debate and the economy, at 66 percent and 58 percent respectively.

While, as I have mentioned many times in reference to this issue, any study that takes for granted the existence of a monolithic block of “Latino” voters is to be taken with a grain of salt, this study is a step up from most in clarifying the divides in the community, and dispelling one particularly insidious preconception that the media seems unable to get enough of. For one, it does distinguish geographically in the nation in a way that corresponds to natural ethnic divisions within the Latino community. For example, one of the most notable bits of data in the study is how close of a fight the general election will be in Florida—a state known for being a Latin American Republican stronghold given its large Cuban American population– should Senator Marco Rubio be on the Republican ticket. It also contrasts what choosing New Mexico Gov. Susana Martínez would do for Republican support, a state whose Latin American population tends to lean further left than Florida’s because of demographic differences.

Another extremely important detail is the amount Latin American voters seem to not really care about immigration, which is the key to understanding their support of the President in relation to the much higher number of deportations under President Obama than his predecessor. The study does note that President Obama’s immigration numbers are lower than one would anticipate from the overall support of his work– “some 41 percent disapprove of the job he is doing regarding immigration, with the number climbing higher to 56 percent among Latinos between the age of 35 and 44.” It also notes that despite this, “in head-to-head match-ups none of the GOP candidates would garner more than 14 percent of the Latino vote come November.” This makes sense in light of how low immigration ranked as an important issue to many voters. While support for policies that make it easier for those who work to become legal participants in the American political system was about the 80% range on issues such as the benefits illegal immigrants provide the country and support of the DREAM Act, immigration did not make the top three most important issues in the election. Immigration was outranked by—naturally—the economy, education, and health care.

It is a statistic not remotely obvious from the coverage of Latin Americans in the media as a political entity. Using the television monitoring tool TV Eyes, we looked at the number of instances of the word “Latino” on the three major networks this week alone. Of the 40 mentions, almost 50% were related to immigration, while only 10% (four mentioned) referenced the education levels in the Latino community. Most were passing references to “the Latino vote” without an issue attached. None referred to the economy as an issue for the Latino community. If this Fox News study is one of many that demonstrate a particular pattern of issue prioritizing in the community—to the extent that it is a community— the media has clearly not met its needs.

As the number of Latino voters in America increases and generations of Latin Americans integrate into their communities as second, third, and fourth generations of Americans, one can expect these numbers to begin to look increasingly incoherent as a monolith, the same way taking a look at the “White” vote across America would result in making a political class out of the average Massachusetts voter and the average Oklahoma voter just the same and expecting them to have the same priorities and preferences would today. This may be the first of many studies that begin to show a trend away from immigration being a central issue to Latinos outside of border states as populations settle and grow within America.