Fraud In The U.S.A.? An Open Letter To Bruce Springsteen For His Obama Endorsement

Fraud In The U.S.A.? An Open Letter To Bruce Springsteen For His Obama Endorsement 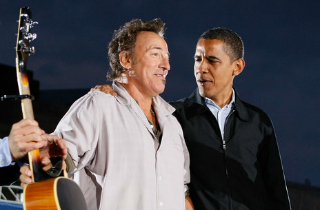 This weekend, legendary musician Bruce Springsteen announced that he would campaign this week for President Barack Obama in Iowa and Ohio. His endorsement of the president should come as no surprise, seeing as Springsteen was an outspoken supporter in 2008. But this time around, there is a significantly strange… and hypocritical… component to the singer’s endorsement. I explain below, in an open letter to one of my musical heroes.

This is not some right-wing rant against “Hollyweird” liberals and their penchant for supporting President Obama and the Democratic Party. Your recent re-endorsement of President Barack Obama doesn’t offend me on its own — everyone saw it coming. But what offends me is what you are abandoning by diving headfirst into the endorsement game.

Do you remember the speech you gave on nearly all 100 tour dates of the 2008 Magic tour? Lord knows I remember it, having seen you three times that year. Before each performance of “Livin’ in the Future,” you gave a little political rant. It went something like this:

“Over the past six years we have, unfortunately, had to add to the American picture: rendition, illegal wiretapping, rolling back of civil liberties, no habeas corpus if you’d like to defend yourself against charges brought against you. These are things that not only attack our Constitution but attack who we are and our very selves.”

Remember that? The song itself, you explained, was about sleeping through all those awful Bush-era changes: “We’re livin’ in the future and none of this has happened yet,” said the catchy chorus.

Except now we are livin’ in the future… and all of this is happening still.

Bush was awful. I was with you on that one. Even though I am turned off when my favorite musicians use their concerts as a gigantic soapbox, I appreciated that you were at least ranting on behalf of civil libertarian values.

But now, after spending six years being the most outspoken musical advocate against Bush-era civil liberties encroachments, you openly endorse a man who has willingly continued these exact “un-American” policies?

Either you are a political fraud or just blinded by the light of partisanship.

Both possibilities are truly disappointing.

Look, I get it. By no means am I saying you should have endorsed Mitt Romney. For all we know, he would be even worse than Obama on these issues — especially given that his foreign policy advisement team is made up of Bush’s favorite circle of neocons. Yikes.

Maybe you truly hesitated before making this official endorsement. Maybe you deliberated for hours and weighed the options: “Should I fully endorse the man who has, thus far, governed the exact opposite of my professed values? Or do I give a tepid endorsement that reflects my hesitance here? Or do I endorse a third party? Or maybe I stay out of this race entirely?”

But I doubt it.

Again, I understand that no one can realistically expect you to show up to these Iowa and Ohio rallies and say something like: “Yeah! Woo! After much hesitation and doubt, I’ve made the tough decision to — despite a multitude of disappointments — endorse this president for re-election because he is the lesser of two evils in my mind! Woo! Yeah! Four more years!”

I guess I just naively expect that someone who used their multi-million-dollar stage as a soapbox to rail against such governmental abuses would feel enough conviction about those issues to remain consistent and principled.

Perhaps you could have endorsed someone like Libertarian candidate Gary Johnson or even Green Party candidate Jill Stein — both of whom espouse the exact views you spent years touting on tour. Or maybe you could have abstained altogether in order to send a powerful message.

Instead you’re just another cheerleader for those in power… when the power is in the hands of your preferred political party.

I hope you reconsider.

PS – All will be forgiven if you would just release the “Electric Nebraska” tapes.