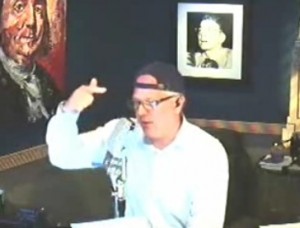 On his radio program today, loyal Mediaite reader Glenn Beck struck back at attacks on his Mormon faith, even on ones that don’t exist. “Bill Press and Tommy Christopher…have written a despicably ignorant article in Mediaite,” Beck said, before playing a clip of Press saying “We don’t need a Mormon to teach Christians what the gospels are all about.”

Of course, Press didn’t co-write the article in question, and the entire point of the article referenced by Beck was that Press should no more attack Glenn Beck’s faith than Beck should attack President Obama’s.

First, some background. In the article to which Beck refers, we embedded a clip of Bill Press criticizing Glenn Beck for making reference to President Obama’s faith as a “perversion of the gospel,” followed by Press launching his own attack at Beck’s Mormon faith. The premise of the piece is that anyone who holds articles of faith is ill-equipped to judge another’s, since such articles are necessarily impossible to prove or disprove.

In this clip from today’s show, Beck never gets around to saying which part of the article he finds despicable, but even as he complains about attacks on his own religion, he continues to attack Obama’s, and questions Bill Press’ adherence to his own faith, to boot:

Beck’s insistence that he’s not “judging” Bill Press or President Obama sounds a lot like the bit where Jon Stewart just tacks “no offense” onto the end of whatever offensive thing he just said. If Beck is just “explaining” Obama’s faith by calling it a “perversion of the gospel,” then I suppose Press was just “explaining” that Christians don’t need Beck to tell them what the gospels are all about.

Beck goes on to say that the people who are now defending Barack Obama’s faith are the same ones who attacked Mitt Romney’s Mormon faith during the 2008 presidential primaries. For the record, here are some of my quotes from that period:

“(Romney) hit all the right notes for people with a casual curiosity about the divide between Mormons and other Christians, pointing to common religious ground and a shared love of our country” (12/06/2007)

It would be foolish to vote for a presidential candidate on the basis of something completely irrelevant to the job, yet there hardly seems to be an article on Mitt Romney that doesn’t codify that notion. In truth, our media bandies all sorts of irreleventia about all of the candidates, but none so specifically and unfairly. (01/06/2008)

You get the idea. In fact, the majority of those attacks, as with the current ones against Beck, were from Evangelical conservatives (with one notable exception, upon which I reported at length).

Furthermore, Glenn Beck gets no fairer a shake than he gets at Mediaite, even from his critics. While I have been vocal and specific in my criticism of Beck, I also reported that donations to the Special Operations Warrior Foundation had covered the cost of the “Restoring Honor” rally well in advance of the event, that Sarah Palin would not receive a speaking fee, and that controversial rocker Ted Nugent would not be appearing.

I’m happy to discuss how I didn’t attack his religion, and will join him in loudly demanding an apology from Bill Press, as soon as Beck offers his own apology to President Obama.