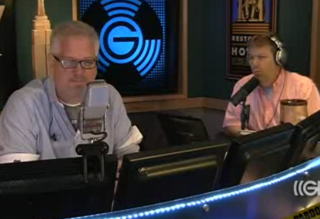 Americans for Tax Reform head Grover Norquist has becoming something of a figure of intrigue as of late, wielding what appears to be significant influence over Congressional Republicans and yesterday raising the eyebrows of former Senator Alan Simpson, who called for an investigation into his funding. On today’s program, Glenn Beck laughed off the idea that Norquist was the “new evil villain,” and that he could possibly be up to no good. “Who is funding Grover Norquist?” he asked his co-hosts, before answering himself: “Why Sesame Street, of course.”

Beck and company had a good laugh with their Simpson imitations, mocking his “peel all the layers of the onion” metaphor by digging deeper and deeper into Norquist’s intentions. “Who knew he was going to grow up and turn into an evil monster?” Beck joked of the beloved Sesame Street character. Then he peeled another “layer of the onion”: “What is with the name Grover? Who names their kid Grover? Why is his middle name Glenn? Is there a connection?” His cohost added somewhat uselessly that “Grover Glenn Norquist doesn’t really roll off the tongue,” but either way, this was clearly a conspiracy to hoard all of the letters “n” by using names that had unnecessary extra ones at the end.

Beck then tried to turn to other mysterious characters– George Soros, Andy Stern, Richard Trumka— but his co-hosts repeatedly stopped him, joking that he had the “wrong guy” and to focus on Norquist instead. Co-host Pat Gray reminded him to keep his eye on the ball as Norquist was “twice as powerful as the Koch brothers, because there’s two of them and only one of Grover.”

The segment from Beck’s radio show below: