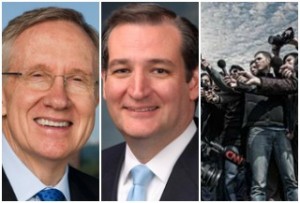 In looking back at the past few weeks of a government shutdown that 99 percent of the country’s population didn’t actually feel directly, and in an effort to hand out grades to media and political members alike, one can only harken back to a meeting between four members of Delta House and Dean Wormer at fictional Faber College in 1978:

Dean Wormer: Here are your grade point averages. Mr. Kroger: two C’s, two D’s and an F. That’s a 1.2. Congratulations, Kroger. You’re at the top of the Delta pledge class.

[sees Bluto with a pair of pencils in his nostrils]

And that scene in Animal House basically sums it up. No one should be proud today. Not President Obama, who again put political gain above everything else. Not John Boehner, who treated this exercise like an invasion of Iraq, a war without an exit strategy. Not Harry Reid, whose obstinacy represents everything wrong with our political system. Not Ted Cruz, the Texas Republican who recklessly acts like he has nothing to lose… because in reality, he doesn’t. Not the media, who will laugh all the way to the bank thanks to the drama (and therefore, ratings) this whole fight provided, which only gave many outlets an excuse to be more hyperbolic, more ridiculous than usual.

In the end, the President always owned the most leverage thanks to legality of the Affordable Care Act. Regardless of the vote margin or how it got done, Obamacare passed in Congress, was signed into law by Mr. Obama, and upheld by a Supreme Court that has more conservatives on it than liberals. Regardless, despite those facts, Republicans in Congress tried to unring the bell by forcing a partial government shutdown in an effort to first defund the ACA before quickly downgrading their demand to simply delaying its implementation.

This is the point where the media failed mightily. Here’s how:

Each hour of programming on, say, cable news consists of six blocks (A-F). These rundown rules can vary during dominant stories like a government shutdown, but the A Block (in this case) obviously contained the latest news on the shutdown. For the most part across CNN, Fox and MSNBC, the focus in the “A” was about the political aspect of the shutdown: who’s winning (Democrats/President Obama), who’s losing (Republicans, with an emphasis on the Tea Party) and what the consequences of losing could possibly mean (GOP possibly losing the house in 2014…but more on that non-story in a moment).

But what about stories regarding the human aspects—the actual effects—of the partial shutdown? Again, it varied, but these stories seemed to be inserted into edited packages placed either at the end of the A block (which are the longest of the six blocks) or in the B block. These human-interest stories invariably didn’t get top billing in the A Block for a simple reason. As indicated earlier in the column, 99 percent of the country wasn’t directly affected by the shutdown. Garbage and recycling still got picked up, local police and firemen were still on the job, trains and buses ran relatively on time. As the old saying goes, all politics is local. And if an issue doesn’t disturb the daily lives of Americans, like, say, an iPhone or Galaxy shutdown would (which would lead to rioting in the streets), most folks simply didn’t care very much about the human aspect of the partial shutdown story.

What many more watching at home do care about is the political scoreboard involved. It’s really no different from reality TV, where there are good guys and bad guys, heroes and villains that make reality political TV an industry within an industry (media cheerleaders from Sean Hannity to Ed Schultz to Stephanie Cutter are also included in the casting outside of the usual “stars” from the political world). So when it came to headlines and analysis, the partisan battle, the political theatre almost always won the day, and always will.

So for the most part, the A Block and B Block featured partisan battles and (to a much lesser extent) shutdown effects, respectively. With a few exceptions, what we didn’t see until 20-22 minutes into almost every program were reports on the aforementioned primary reason for the partial shutdown in the first place:

Regardless of ideology and which villain you’ve been rooting against, we all know the deal here…Obamacare/the ACA has been a “big failure” in the words of the Washington Post’s Ezra Klein, who won’t be going bowling with Mr. Cruz anytime soon. You can find media members and politicos of all stripes who echo that sentiment and almost no one willing to defend Obamacare’s performance. As we’ve seen, reporters from CNN to Fox and MSNBC have all experienced a healthcare.gov website that works as well as an unpaid GoDaddy account. Consistently down and/or under construction no matter what time of day or night, the results (in terms of total signups, which is a number so embarrassingly low, the White House refuses to reveal it until November 15th) have been nothing short of horrific thus far.

So with these facts in mind, should the law have been delayed for a year, as Republicans asked?

For many outlets, this is where the media disconnect occurred. Instead of connecting the dots by placing both the political war over the partial shutdown and Obamacare’s various failures in the same sentence, the two were treated as mutually exclusive, as two separate entities. For if that wasn’t the case, we would have seen both stories aligned at the top of the hour, not presented separately 20 minutes apart.

A microcosm of this broken presentation was seen during last week’s presidential press conference, where Mr. Obama took ten questions over a 45-minute span, and not one involved his signature “accomplishment” in office, the ACA. Questions like: “How many people have signed up, Mr. President?” and “Why are there still all of these massive glitches on a site that has been in the making for over three years?” simply didn’t warrant inquiry for those privileged enough to be called upon. In a related story, a Millward Brown Digital analysis shows only 0.4% of all HealthCare.Gov visitors enrolled in the first week.

As for winners and losers in the political arena, (in the long term) there are none for the former and plenty for the latter. Despite what you’ll be hearing on cable news for the rest of the week, there will be no wave election for Democrats in 2014. But don’t take my word for it…just ask Nostradamus 2.0, otherwise known as Nate Silver, who tends to always get these things right:

“In 2014, likewise, it will require not just a pretty good year for Democrats, but a wave election for them to regain the House. But wave elections in favor of the party that controls the White House are essentially unprecedented in midterm years. Instead, the president’s party has almost always lost seats in the House — or at best gained a handful.”

As Silver also correctly points out, the government shutdown story may seem big now, but will have very little effect in November 2014.

So for now, if you’re a Democrat, enjoy the “victory” of adding another one trillion to the already-massive U.S. debt while protecting an abominable Affordable Care Act that is neither affordable nor functional.

If you’re a Republican, lick your wounds and consider a better long-term strategy the next time your party engages in high-stakes poker hand with a pair of threes while your opponent is holding one-eyed royals.

Of course, cable news is the only real winner here. Because thanks to kicking the can just a little down the road, CNN, Fox and MSNBC all get this ratings-booster back in a couple of months with the same divisive cast back for audiences to cheer or boo.

To sum the whole cast of characters up in this whole embarrassing display to the world, it’s worth echoing Dean Vernon Wormer one more time:

“Fat, drunk and stupid is no way to go through life, son.”