Hannity Doubts Obama Will Do Anything About ‘Modern Day Nazis’ ISIS 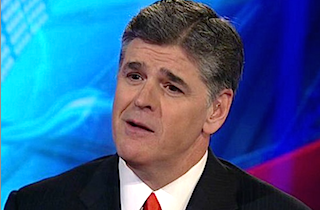 Despite some aggressive remarks from President Barack Obama earlier this afternoon in regard to ISIS beheading American journalist James Foley, Sean Hannity said on his radio show today that he doubts the president will have the fortitude to do anything to combat the rise of what he is calling “modern day Nazis.”

“I’m literally shaking, I’m so angry at what I saw, this beheading of James Foley,” Hannity said Wednesday, before sending a message directly to the president.

“I don’t care if it’s the Islamic Jihad, Hamas, Hezbollah, the Muslim Brotherhood, ISIL, ISIS, Al Qaeda,” he said, grouping numerous Islamic extremist groups under one banner. “You need to identify them for who they are: They are modern day Nazis!”

“And what you need to do, Mr. President, is you need to engage and annihilate these bastards that chopped this kid’s head off!” Hannity continued. “That’s how you deal with evil in your time. I tend to doubt you’ll do it, but that’s what needs to be done. Missile strikes here and there, mobilizing a nation to defeat an enemy, you know what? This isn’t going to happen overnight. They’re at war, they’re dedicated to Israel’s destruction and our destruction. What the hell are you going to do about it?”

“The United States of America will continue to do what we must do to protect our people,” Obama said in his statement from Martha’s Vineyard Wednesday. “We will be vigilant and we will be relentless.”

And watch Obama’s full remarks on the killing by ISIS below, via Fox News: