Hannity: Why Stop Selling Confederate Flags If You Can Still Buy Rap Music? 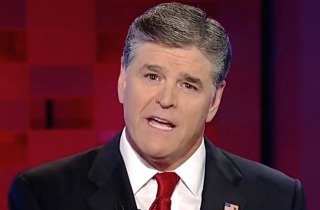 Following the renewed national discussion on the controversy surrounding the Confederate flag, retailers, manufacturers, and many other organizations have all picked up the trend of distancing themselves from it and any related confederate paraphernalia. During his radio show on Wednesday, Sean Hannity questioned if there was any point in removing the flag when there are so many things still on the shelves that he finds offensive.

Hannity hypothetically began to ask whether Walmart or Amazon would still be selling music from rappers like 50 Cent and Snoop Dogg if the Confederate flag will no longer be available. “Why do I say that,” Hannity explained, “because a lot of the music by those artists is chock-full of the ‘N word,’ and the ‘B-word,’ and the ‘H-word,’ and racist, misogynist, sexist anti-woman slurs none of those retail executives would be caught dead using.”

Hannity also brought up the increase in sales the Confederate flag saw on Amazon before it was taken off, and wondered whether rap music would have experienced a similar rush. Hannity then went on to call President Obama a hypocrite for speaking against racism in America after previously inviting music power couple and harsh-language-users Jay Z and Beyonce to the White House.

“If it’s okay for Obama’s teenage daughters and people to go into these stores and buy music chock-full of the n-word, the b-word, well maybe we should consider banning that too,” Hannity said. “We’re in the process of banning everything.”

You can listen to Hannity’s radio segment here: