Herman Cain On Mitt Romney: Media Doing A Good Job Beating Him Up, ‘They Don’t Need My Help’ 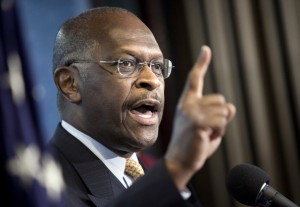 One of the reasons Republican presidential candidate Herman Cain seems to be gaining in popularity with primary voters is because of his real-world accomplishments and a lack of political experience. Yet in an interview with the conservative magazine National Review, Cain seems to have adopted one characteristic of a seasoned politician: never speak ill of another member of your own political party. Cain explained why he doesn’t plan to go on the attack against Michele Bachmann or Mitt Romney.

Cain suggests he doesn’t plan to trash Bachmann in order to appeal to Tea Party voters, especially since they agree on so many issues. Instead, the main difference between him and Bachmann is “leadership style.” Cain argues:

“She has been a businesswoman at one point in her career. I have been a businessman my entire career. So I have a longer track record of fixing problems, of turning things around.”

And Romney is safe from Cain’s criticism too, as he says attacking Romney’s record will be left for the media to handle since “they’re doing a good job beating him up on that hill. They don’t need my help.” The closest he comes to jabbing Romney is admitting “we’re not going to raise as much money as Mitt Romney is capable of spending, or what he’s already spent.”

Regarding any critics who dismiss his candidacy because of a lack of foreign policy experience, he’s got a simple (and honest?) message for them: “how much foreign-policy experience do you need to listen to experts?” And trust him, he knows “a long list of people who know what the hell we should be doing.”

Check out the full interview at National Review Online