Hey, Guess What? Every Political Side Has Extremists Too! 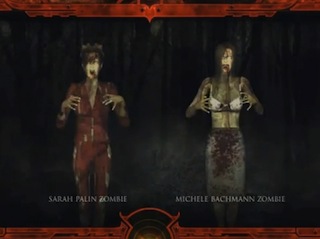 Right now, the Conservative media is freaking out over an online video game called Tea Party Zombies in which you walk around some terrible Duke Nukem 3D-looking environments and shoot zombies that look like Sarah Palin, Glenn Beck, and others.

However, reading the apocalyptic headlines these people are writing is equally infuriating. New York Magazine has collected some great quotes like “the reality of the situation is that liberal Democrats don’t play by the same rules for society” and “It is pretty much impossible, at this point, to tell where the respectable left ends and the cesspool left begins.”

These people do realize there are about a billion “Kill Obama” Flash games online as well, right? There are. Feel free to Google them (although be careful what you search if you don’t want the Secret Service tracking your computer). Here’s an example called Slap Obama in which the instructions are simple. I’ll quote directly:

My point is this; I am so sick of biased media figures from both sides holding up one example to be representative of an entire whole. I spent an hour last night watching the hosts of The Five explain how Jimmy Hoffa’s comments are proof that the entire Left are violent thugs that only know how to name call. And last year, I had to watch every single MSNBC host explain to me how one picture of one idiot proves that every person at a Tea Party rally is racist.

Every side has extremists. Every side has assholes. You can find utter filth espousing every possible political belief online. When you start trolling the Internet and posting that junk on your biased network or blog and you try to pretend that the other side’s the only evil one, you’re just creating more extremists and assholes.