So, How Long Till SCOTUS Demands A Cable News Show?
Fallout

So, How Long Till SCOTUS Demands A Cable News Show? 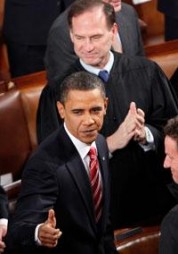 When you’re Joe Wilson and you heckle the President you are required to quickly make an apology before turning around and stuffing your re-election coffer with all the monies pouring in from voters who consider you a hero. When you are a Supreme Court justice and you quietly mouth back to a President who has just called you out during his first official State of the Union address the result is a lot of intellectual heavy weights using to oped pages to wrestle over the role of the court (does everybody now want to be a cable news talking head at heart? and the appropriateness of the President challenging (threatening) it to their faces in one-sided public forum.

Glenn Greewald of Salon has been especially vocal on what he considers an egregious error on Justice Alito’s part (though technically Alito may have been correct) , an act that further marks the decline of the Supreme Court, which began with Bush v. Gore.

Justice Alito’s flamboyantly insinuating himself into a pure political event, in a highly politicized manner, will only hasten that decline. On a night when both tradition and the Court’s role dictate that he sit silent and inexpressive, he instead turned himself into a partisan sideshow — a conservative Republican judge departing from protocol to openly criticize a Democratic President — with Republicans predictably defending him and Democrats doing the opposite. Alito is now a political (rather than judicial) hero to Republicans and a political enemy of Democrats, which is exactly the role a Supreme Court Justice should not occupy.

Alito’s behavior meanwhile has opened the floodgates for Democratic complaints that both Alito and Chief Justice John Roberts (both Bush 43 nominees) misled Congress during their confirmation hearings when they “represented themselves as jurists who would respect precedent.”

[T]here was also absolutely nothing inappropriate about the justice’s reaction to him. Both the president and the justices are political actors, and all are entitled to screw up their faces and grumble in public as they see fit.

And then there’s this from George Will which doesn’t actually address the SCOTUS moment per se, but instead articulates what I think Sarah Palin (also Glenn Beck last night) was trying to get at when they complained of the president’s lecturing: