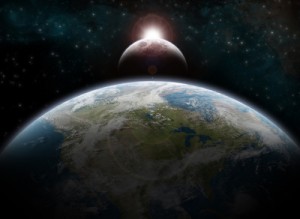 As we enter the new year, the most important question on people’s mind is whether or not the world will officially end as we know it by next December. But let’s face it, if 2012 is really going to bring about end times (because we should clearly be basing our plans for the end on the Mayan calendar), it’s going to have a tough act to follow. Many people are writing up 2011 as the year of this or the year of that, but let’s keep things in perspective here: 2011 was the year that the world descended into random chaos.

Look, 2012, I know you think you’re so important because the Mayans said everything ends with you. But short of sharks rising from the seas, the sun mysteriously vanishing, or some other supernatural event taking place, you’re really not going to come close to just how insanely screwed up this year was. You know what the first big story of 2011 was? Thousands of birds dropping dead from for no apparent reason. In more than one place! Chicken Little may have been right after all. Of course, all the dead birds were immediately followed by over two million fish dying in the Chesapeake and thousands of dead crabs washing up on the shores of England. How much more “end of the world” can you get than that?

And isn’t 2012 just a little insulted that Harold Camping tried to steal its thunder twice this year by predicting the end of the world would commence in May, then recalculating his prediction to October? Many Christians who believe the apocalypse is coming can’t say with absolute certainty that it would happen this or next year. Though as Glenn Beck, the arbiter of all things apocalyptic and conspiratorial, pointed out, it’s never too early to prepare for the end of the world.

It’s no coincidence that Time marked “The Protestor” as the Person of the Year. From the Arab Spring to Occupy Wall Street, 2011 has been a strong year for people-powered protests. But don’t make the mistake of thinking everything has turned out for the better. The ousting of Egyptian President Hosni Mubarak was a mere prelude to the equally repressive (if not more so) tactics of the military leadership now in charge of the country. Protestors in nations like Syria are being targeted for death by their leaders. Kim Jong-Un has been the Supreme Leader of North Korea for less than a week, and he has already issued a threat of war against South Korea. The Libyan rebels who united against the regime of Moammar Gaddafi have now split into different factions competing for power. In fact, this week al-Qaeda sent forces to Libya to establish a “fighting force” there.

There’s something poetic about all of this; the crumbling of the forces of evil only to find another evil taking its place. And sure, there is no “scientific basis” or “actual evidence” that the world is ending. In fact, NASA has insisted the only big event to occur in December 2012 will be the winter solstice. But doesn’t it feel like the world is collapsing around us?

I mean, in a year marked with international protests and the like, the most Googled name of 2011 was Rebecca Black. Also on the list (in order) are Google+, the late Ryan Dunn, Casey Anthony, Battlefield 3, the as-of-yet unannounced iPhone 5, etc. The Fukushima nuclear plant ranked eighth on the list, however, which was beaten by the next-highest search: Adele. Meanwhile, the most searched name on Bing was “Justin Bieber.” And if we live in a world where people are on the tip of their toes listening to the insane ramblings of Charlie Sheen or taking Donald Trump seriously as a presidential candidate, it’s possible the end may already be upon us.

And sure, talking about the end of the world in the media is just a way for people to give airtime to a story that the vast majority of human beings thinks is beyond absurd and the only reason they might do it is for publicity and maybe some ratings, but what if the apocalypse actually does happen next year? Every single newscaster who reported on the end of the world should be up for a posthumous Pulitzer if it happens. And propping up the end of the world isn’t just good for ratings, it’s also good for the tourism industry. Mexico is launching a year-long campaign to attract tourists to Mayan territory so they can marvel at how such primitive people could predict an event so far in the future.

Now let us hypothesize that the world does not, in fact, come to an end next year. The question remains: when will it end? Isaac Newton predicted the world would not end any time before 2060, so if we’re all still alive in 2013, congratulations! We have anywhere between 47 and several million years left to go!

Personally, if the world does end in my lifetime, I’m hoping it’s less like that awful 2012 movie and more like The Walking Dead. Now that would be an end of the world to remember. (If anyone were around afterwards that to remember it.)