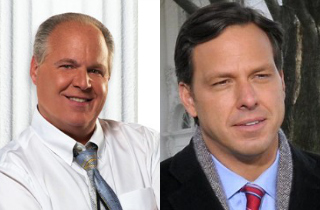 During his syndicated radio program Thursday afternoon, conservative host Rush Limbaugh paraphrased ABC News White House correspondent Jake Tapper on why much of the media failed to dig deeper into the Benghazi attacks before the presidential election. In return, Tapper accused Limbaugh of misrepresenting what he has said, and encouraged everyone to go back to the actual tapes for evidence.

“Jake Tapper, I think he was on Hannity or somewhere, he’s got a book out. ABC reporter. He says the reason we didn’t report on Benghazi before the elections is because Republicans were lying about it,” Limbaugh said. “So there was nothing to report. They were telling stuff that wasn’t true. The report where they were saying was lies. So there wasn’t anything to report,” he continued rattling off what he believed Tapper said.

After receiving word that Limbaugh paraphrased him as such during the radio show, Tapper took to Twitter to accuse the conservative host of misrepresenting what he said during any of his cable news appearances:

Folks, Mr. Limbaugh is not accurately representing what i said. go to facebook.com/OutpostBook + see clips of what i actually said on CNN/Fox

Tapper referred his followers to video links of his appearances on both Fox News’ Hannity and CNN’s Piers Morgan Tonight. As it turns out, during the Hannity appearance to which Limbaugh referred, Tapper did not make any of the statements attributed to him.

Below is the relevant portion of Tapper’s Fox News appearance on Wednesday night (video below transcript):

HANNITY: I felt questions weren’t asked today at the press conference. You said between the first and second debates, there was a general feeling in the Romney campaign that the media was ready to write the Obama comeback story. In other words, they feel, as I do, that there’s an institutional bias. That’s what they were saying to you. Do you think that’s true?

TAPPER: This election, I didn’t get as much of a general scheme because I was just focused on Obama, as oppose to the last campaign, where I hopped around a lot and went covered a lot of different campaigns. So, I don’t know. I mean, I think that there are ways in which narratives take control and sometimes they’re not fair. I mean, I think, just to give a nonpartisan example, I think the media wasn’t fair to Hillary Clinton during the democratic primaries. There were a lot of anti-Hillary stories and more scrutiny on her than there was on then Senator Obama. And sometimes that’s because one person runs a better campaign, one person is a more inspirational leader, one person’s a fresher face. But whatever the reasons, I think sometimes the media should be a little bit more careful about bending over backwards to be fair?

HANNITY: I think one of the issues is, I mean, the president was able to run out the clock on Benghazi. Where was he that night? Did he know about the requests for security? Was there a request for assistance that night? With those that were under fire? We know that Ty Woods and one other Navy SEAL; they disobeyed orders because they were hearing the cries for help. I didn’t feel we got an answer to a lot of questions today.

TAPPER: There’s a lot we don’t know about that night, still. I mean, what we do know about that night is that President Obama was meeting with Secretary Panetta and the joint chiefs chairman in a pre-scheduled meeting and that’s when they were told that the compound was under attack. And according to the White House, the president said, do what you need to do to get those– to save the Americans.

HANNITY: That’s what he said. But where was he? But when did he know? Who did he talk to? Did he? Was he the person who said to stand down to the CIA annex which is a mile away? These to me, seem basic. We’re watching this in real-time. Doesn’t it seem like the president ought to have known that when the State Department’s watching in real-time?

TAPPER: Well, I don’t have the answers that you are looking for. I certainly —

HANNITY: I am not grilling you.

TAPPER: No, I mean, I think a lot of — there is a lot we don’t know about — some of the things you just asserted, you know, the CIA denies to be true, which is not to take away from Jennifer Griffin’s, you know, great reporting. But the CIA says there was no stand-down order. There’s obviously a lot we don’t know about. And, you know, there have been more and more tick-tocks provided, you know, minute-by-minute accounts from the Pentagon, from the CIA, from the State Department. And at some point, there needs to be some sort of reckoning because they don’t always add up.

During that exchange, Tapper did dismiss some of Hannity’s facts as contradicted by CIA statements, but he did not seem to say that the media avoided reporting on Benghazi simply because “Republicans lied.”