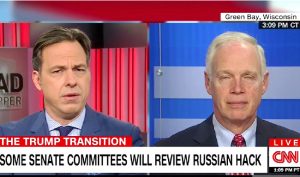 During an interview with Sen. Ron Johnson (R-WI), CNN host Jake Tapper made multiple attempts to to get Johnson to provide an example of President-elect Donald Trump being critical of Russia or Vladimir Putin.

Later in the conversation, Johnson pointed out that the United States needs to “start dealing with Russia from a position of strength rather than weakness.” This led the CNN anchor to say he understood Johnson was critical of President Obama’s policies, “but have you ever heard Donald Trump say anything critical about Vladimir Putin or Russia, ever?”

The Senator responded by stating that Trump has talked about strengthening our borders and defeating ISIS, which represents strength, but didn’t answer Tapper’s question.

The Republican replied by pointing out that he himself has been critical of Putin and perhaps when Trump is POTUS, he’ll get all the information he needs to be “very wary of Russia.”

One last time, Tapper tried to get an answer from Johnson: “When I asked you if you could name one thing that Donald Trump ever said critical of Vladimir Putin, I didn’t hear an answer.”

“I’m not an encyclopedia of the statements he’s made or not made,” Johnson said.