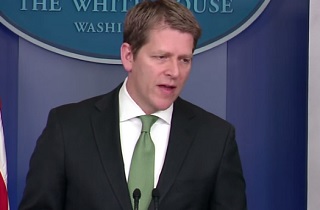 At Tuesday’s White House daily briefing, Press Secretary Jay Carney donned his media critic hat when he sarcastically told reporters that he “noted just substantial interest” in what “must be the very top news story among the Washington press corps today, just based on the incoming inquiries.”

What story was Jay Carney being flooded with inquiries about? Perhaps the negative effects of the sequester that have Rachel Maddow so pissed off? Not exactly. From Tuesday’s White House briefing:

CNN’s Athena Jones: And last thing, on the Easter Egg Roll. You said earlier this month that the plan is for that event to go on, go forward as planned, but we know that the ticket confirmations have a disclaimer that it could be canceled. Where do things stand now? Which is it going to be? What do you expect?

MR. CARNEY: Well, I appreciate the question, and I’ve noted just substantial interest; it must be the very top news story among the Washington press corps today just based on the incoming inquiries. And I just want to be clear that we are currently planning to proceed with the Easter Egg Roll. Because we distributed tickets to the Easter Egg Roll far in advance of the actual event, we alerted all ticket holders that this event is subject to cancellation due to funding uncertainty, including the possibility of a government shutdown. Again, the language that got attention on the Hill and was reported duly by the press was prepared well in advance, and it had to do with the potential for at least the possibility of a government shutdown should there not be a resolution on the continuing resolution. It was not about sequester principally.

So having said that, I want to be clear that because it certainly looks like there is progress being made, and nobody expects a government shutdown, that we have every expectation that the Easter Egg Roll will proceed as planned. I hope that settles the matter.

For those of you unfamiliar with the coverage of the effects of the sequester, allow me to catch you up. White House tours. Damn, that was fast. The $85 billion in forced spending cuts that were agreed to as a way to get Republicans not to blow our economy’s brains out have had, and will have, serious consequences for millions of Americans. The Congressional Budget Office estimates that the sequester will cost three-quarters of a million jobs and .6 percent of our GDP this fiscal year, and has already resulted in a raft of negative effects on pre-schoolers, hungry senior citizens/babies/mothers, and yes, our military veterans.

So far, though, the coverage of the sequester’s effects has been mainly limited to the cancellation of White House tours, which, to be fair, presented the media with some easily digested optics, but which, as Ezra Klein points out, is mainly a problem for the privileged and well-connected. Recently, though, the media has threatened to widen its gaze to include the White House Easter Egg Roll.

The narrative started out on Fox News, which has had a hard time getting its story straight. First, King Obama was being a jerk for having the Easter Egg Roll, because why waste all that money entertaining members of Congress and their families? Once Jay Carney patiently pointed out that the 538 members of Congress don’t actually have 35,000 family members to invite, and that the event is, in fact, open to military families and regular folk alike, the narrative shifted to King Obama being a jerk for “threatening” not to have the Easter Egg Roll. As Carney pointed out in the clip above, the notice that was sent to ticketholders this week, informing them that the event might be canceled, had nothing to do with the sequester; if Congress doesn’t pass a continuing budget resolution by March 27, the federal government will shut down, which would force the cancellation of pretty much everything. Once again, the White House Easter Egg Roll will be about the least among the effects of such a shutdown.

Like many reporters, I really hate it when Jay Carney tells me what to care about, but that doesn’t make him wrong. Whoever Americans decide to blame for the sequester, or the CR, they deserve to know what they’re blaming them for, and it doesn’t begin and end at the White House gates. Aside from this trivial focus, the media’s narrative has been all over the place, accusing the White House of overhyping the effects of sequester, while crapping their pants over the canceled tours. In the run-up to the sequester, the White House did send out a raft of administration officials to explain the effects the cuts would have, but I distinctly recall that all of them, the President included, said all along that these effects would be gradual.

As the deadline approached, the President reiterated the message that the administration had been delivering all along, that the sequester effects would be serious, but not “an apocalypse,” and was accused of “backing off.” Then, the sequester deadline passed, and the media asked “Where’s the sudden apocalypse we were promised?”

In a few months, when the CBO’s predictions begin to be felt more acutely, the same media will surely ask “Why didn’t the President tell us it would be this bad?”

But right now, Carney’s critique seems to have maybe worked. Aside from Fox News, the Easter Egg Roll, despite all of the inquiries Carney has received, has been scarcely mentioned on cable news. That could be a by-product of Carney’s scolding, or it could be because his answer kind of disintegrated any connection it might have had to the sequester narrative. Let’s see if the press completes the other half of that equation, and begins to report on some of the ways the sequester is hurting people now, and will hurt them in the months ahead.