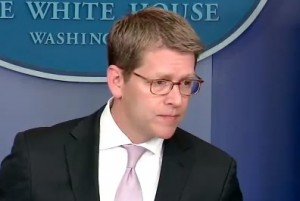 President Obama is under fire for remarks he made in a 60 Minutes interview Sunday night regarding Israel and Iran, in which he spoke about “noise” on the subject of Iran’s nuclear ambitions, and referred to Israel as “one of our closest allies” in the Middle East. While Republican presidential candidate Mitt Romney is making predictable hay out of the remarks, the mainstream media have been complicit in manufacturing outrage over them. At Monday’s White House briefing, Press Secretary Jay Carney addressed the President’s comments.

Here’s what President Obama said in that 60 Minutes interview that has conservatives accusing him of  “downgrading” our alliance with Israel:

STEVE KROFT: “How much pressure have you been getting from Prime Minister Netanyahu to make up your mind to use military force in Iran?”

PRESIDENT OBAMA: “When it comes to our national security decisions—any pressure that I feel is simply to do what’s right for the American people. And I am going to block out—any noise that’s out there. Now I feel an obligation, not pressure but obligation, to make sure that we’re in close consultation with the Israelis—on these issues. Because it affects them deeply. They’re one of our closest allies in the region. And we’ve got an Iranian regime that has said horrible things that directly threaten Israel’s existence.”

The President obviously misspoke when he called Israel “one of” our strongest allies in the region, obviously because, as Jay Carney pointed out at today’s White House briefing, the President has said, many times, that Israel is our strongest ally, but the line plays like a much bigger gaffe to conservatives, who have constructed an alternate reality in which Israel is now located under a bus.

Romney is also characterizing the “noise” comment as a reference to Prime Minister Benjamin Netanyahu, and while there is arguably room for interpretation, it seems pretty clear that the “noise” in question isn’t from Prime Minister Netanyahu, but from those who would use Netanyahu, Israel’s security, and Iran as a political wedge in a domestic election campaign. Lost in all of that noise about diplomacy is an important fact that the mainstream media has been complicit in obscuring: that, when it comes to foreign policy, world leaders are always speaking to multiple audiences.

When Steve Kroft (and anyone else) talks about “pressure” from Prime Minister Netanyahu, he’s failing to recognize that convincing President Obama to attack Israel isn’t his only job (or even necessarily an important goal). His most important job is to scare the living crap out of Iran, which he’s succeeding at, if Iran has any sense. It is interference from people like Mitt Romney, who can say anything he wants without taking any responsibility for the outcome, that President Obama was referring to as noise.

By the same token, when Mitt Romney runs his mouth about Iran and Israel, there are also other people listening, and when he says he’s ready to throw in the towel on Mideast peace, or that he doesn’t know what a dirty bomb is, but is scared enough to be held hostage by the mere threat of one, our enemies lick their chops, and our friends around the world wonder if Romney’s views are what America’s leaders really think.

White House Press Secretary Jay Carney took several questions about that 60 Minutes interview, pointing out that the President has maintained an “unprecedented level of cooperation” with Israel on matters of security, and has the strong support of Israeli leaders.

Here’s video of Mr. Carney responding to questions about that 60 Minutes interview, followed by a transcript:

MR. CARNEY: The President was making clear that his commitment and this country’s commitment to Israel and Israel’s security is as strong as ever and unbreakable in nature.

There’s obviously a lot of noise around this issue at times. His point was clearly that his objective is to take every step possible to enhance Israel’s security as part of our strong relationship with Israel. It is demonstrated by the unprecedented level of cooperation this administration has had with Israel on matters of defense and security. That’s a fact testified to not just by the President and representatives of his, but by the Defense Minister of Israel, Ehud Barak, and others in the Israeli government.

He is also quite clear that he is absolutely committed to preventing Iran from acquiring a nuclear weapon. And he has marshaled a consensus internationally that has never existed before behind a policy that pursues a diplomatic track with Iran as we attempt to compel Iran to give up its nuclear weapons ambitions on the one hand, and then a track that through punitive sanctions puts enormous economic and political pressure on Iran and isolates Tehran further and further from the world, making it clear that the price of refusing to abide by its nuclear — by its international obligations with regards to its nuclear program is very high.

As he has said, the President believes that the window of opportunity for a diplomatic resolution to this matter will not remain open indefinitely, and he retains all options on the table for keeping that commitment to prevent Iran from acquiring a nuclear weapon.

Q Jay, in the 60 Minutes interview the President also said that Israel was “one of our closest allies in the region,” and I guess the Middle East. Who is our closest ally?

And as I just said in answer to some other questions, President Obama has taken action to assist Israel with its security that is unprecedented. The depth of our cooperation, the amount of our assistance has never been greater. And you’ve heard Israeli leaders verify that.

The President’s commitment to preventing Iran from acquiring a nuclear weapon is categorical and clear. He, upon taking office, took an approach that changed the dynamic of this situation, a dynamic, which, prior to him taking office, had much of the world divided on the issue. He has through his efforts unified the international community in pressuring Iran and viewing Iran as the problem. And the result has been an unprecedented regime of sanctions, as well as isolation that this President believes needs to be pursued because the surest way to prevent Iran from acquiring a nuclear weapon is if Iran itself decides to forego nuclear weapons in a verifiable way.