Jay Carney Pushes Back On Republican Framing Of Recess Appointment 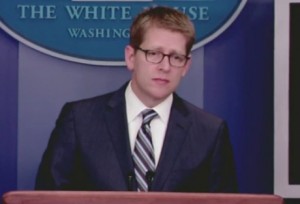 President Obama‘s Wednesday announcement of Richard Cordray‘s recess appointment to head the Consumer Financial Protection Bureau prompted copious wailing by Republicans, who had spent months blocking the nomination in order to kneecap the newly-formed agency. At Thursday’s White House briefing, the mainstream media’s focus was, of course, on whether the President should have done something to make Republicans mad.

There are two important elements to this debate, the first of which is whether the Republicans were overstepping the separation of powers by blocking a recess appointment using seconds-long pro forma (Latin “as a matter of form”) sessions to technically remain  in session, or whether President Obama overstepped by making that recess appointment when the Senate was technically in session. It’s essentially a debate over whether fist ball does, in fact, beat them all.

The second, related element is whether Republicans in the Senate have been (since July) arrogantly circumventing the American people by blocking Cordray, not because they object to him, but because they want to scuttle an agency that was created democratically, through our legislative process, or whether President Obama’s response to that obstruction, as Sen. Mitch McConnell had the stones to say, equals “President Obama, in an unprecedented move, has arrogantly circumvented the American people by ‘recess’ appointing Richard Cordray as director of the new CFPB.”

Instead of addressing the obvious answer to the second question, or the legitimate substance of the forst, Press Secretary Jay Carney had to answer question after question like this:

I’m not picking on Norah O’Donnell here; there were six questions about whether making the Republicans mad would make it hard to get things done, as if things have been humming along so breezily until now. Carney handled the questions well on the substance, but this is one of those occasions when I wish he’d have worked the ref a little, as he has been known to do. The premise of these questions is absurd, and I don’t think I’ve ever heard a Republican asked if it’s wise to piss off the President.

Now, the questions surrounding the recess appointment are another matter. Every party loves recess appointments when their guy needs them, and when they’re the opposition, recess appointments are a threat to democracy and kittens. In my view, the recess appointments themselves should be judged individually. In Cordray’s case, it was more than justified, and you could make the argument that even in the case of a horrible nominee like John Bolton, presidents deserve to get their appointees, and voters should just try harder not to elect bad presidents. It’s an interesting philosophical question. Doing away with filibusters for political appointees smacks of majoritarianism, but if I lean one way or the other, it’s toward giving presidents an up-or-down vote on appointees.

The question of whether the pro forma sessions do, or should, prevent recess appointments is another matter, entirely. The pro forma session is a bit if a joke, a 30-second gaveling in and out of the Senate in order to preserve the artifice that the body is not in recess, when for all intents and purposes, it is. Think of the Senate session as a barroom pool table, and the pro forma sessions are one guy hitting the cue ball into the rail every now and then, just to retain possession of the table. The American way is, that guy ends up in the parking lot getting throatpunched by Patrick Swayze.

Here’s how The White House defended the President’s actions, citing a concurring opinion by former members of the Bush Justice Department:

Here are the facts:  The Constitution gives the President the authority to make temporary recess appointments to fill vacant positions when the Senate is in recess, a power all recent Presidents have exercised.  The Senate has effectively been in recess for weeks, and is expected to remain in recess for weeks.  In an overt attempt to prevent the President from exercising his authority during this period, Republican Senators insisted on using a gimmick called “pro forma” sessions, which are sessions during which no Senate business is conducted and instead one or two Senators simply gavel in and out of session in a matter of seconds.  But gimmicks do not override the President’s constitutional authority to make appointments to keep the government running.  Legal experts agree.  In fact, the lawyers who advised President Bush on recess appointments wrote that the Senate cannot use sham “pro forma” sessions to prevent the President from exercising a constitutional power.

The opposing view holds that everybody at the bar has to just play darts all night, and lump it, because technically, the dude with the cue ball is “playing pool.”

I realize that the Patrick Swayze philosophy leaves open the chance that a President Perry could appoint Ted Nugent as a circuit court judge, or a President Paul could install Cheech and/or Chong as Secretary of Agriculture, but those are things people should think about before they pull the lever, in my view. Either way, the media owes the public a more substantive conversation that “Are you sure you want to piss those guys off?”