Jay Carney’s Message To Reporters ‘Screamed At’ By Sources: Toughen Up 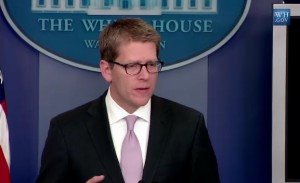 At Wednesday’s White House daily briefing, Fox News Chief White House Correspondent Ed Henry asked Press Secretary Jay Carney to respond to a report that a White House official had “screamed and cussed at” CBS News reporter Sharyl Attkisson, over the unfolding Fast and Furious story. Carney said he didn’t know about that specific conversation, but elaborated in his response that, in general, “hard-bitten journalists” ought to be able to handle “tough conversations” and “an extra decibel or two in a phone conversation.”

Henry related Attkisson’s claim, which she made on Laura Ingraham‘s radio show. “Sharyl Attkisson, a CBS News reporter, said, a few days ago that a White House official just yelled and screamed at her, she’s been reporting on this for some time, about this whole story,” Henry said.

He then framed his question within Carney’s experience as a journalist. “You were a reporter once, when government officials start yelling at you, sometimes it’s because they’re getting defensive, right?”

“I have no insight into the conversation she may, or may not, have had,” Carney began.  “I know that you guys are all hard-bitten veteran journalists, and probably don’t complain when you have tough conversations with sources sometimes.”

He added, “Again, this is just generally speaking, I don’t know about it.”

Henry, unsatisfied with the response,  followed up by asking, “She said this on the record, that she was yelled at and screamed at. Why would the administration be yelling at her about this story?”

“Again, I don’t…I take issue with the report,” Carney said. “I don’t know that it’s true. What I think is that I know you are tough enough to handle an extra decibel or two in a phone conversation. I’m not sure that that happened here, but it’s surprising to me.”

There’s a lot of reading between the lines to be done here, of course. The idea that Carney hasn’t spoken to Eric Schultz about Attkisson’s claim is absurd, but that’s not what Carney said. He obviously didn’t want to engage in a “he said, she said” over a conversation that, apparently, wasn’t taped, but also wanted to defuse the story somewhat.

The issue here, though, isn’t a “tough conversation,” or a couple of decibels. I’ve been reporting on this White House for nearly three years now, and I’ve irritated more than my fair share of press aides, but I’ve never been cursed at by one, at least not to my face. Whether Carney wants to air it out publicly or not, it’s a good bet Schultz won’t be cursing out any other reporters, anytime soon.