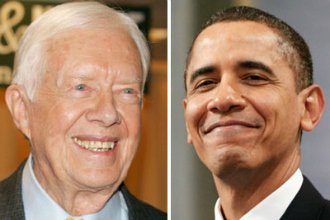 Former President Jimmy Carter, well-known for being outspoken on human rights issues, took to the pages of Sunday’s New York Times to pen an op-ed criticizing America’s “shameful human rights record.” In the piece, he essentially criticizes President Barack Obama‘s anti-terror policies — largely a continuation and, at times, exacerbation of George W. Bush‘s anti-terror policies — without naming either president at all.

“The United States is abandoning its role as the global champion of human rights,” Carter began. “Revelations that top officials are targeting people to be assassinated abroad, including American citizens, are only the most recent, disturbing proof of how far our nation’s violation of human rights has extended,” he wrote, referring explicitly to President Obama’s so-called “kill list” without actually naming the administration.

“Recent legislation has made legal the president’s right to detain a person indefinitely on suspicion of affiliation with terrorist organizations or ‘associated forces,’ a broad, vague power that can be abused without meaningful oversight from the courts or Congress,” Carter continued, referring to last year’s National Defense Authorization Act provision that gave the executive branch the right to indefinite detention. President Obama had threatened to veto the bill, mostly for political reasons, and ultimately ended up signing it (unsurprising, seeing as how it codified the detention powers he had been defending in years prior).

Carter does list a few Bush-specific policies as evidence of our “shameful human rights record,” namely the cancelation of wiretapping restraints under Carter’s Foreign Intelligence Surveillance Act of 1978. But, just like his failure to name President Obama, Carter oddly restrains from indicting Bush in any of these policies.

Carter then went on to condemn the increased use of unmanned drone strikes under the Obama administration, all without naming the president:

After more than 30 airstrikes on civilian homes this year in Afghanistan, President Hamid Karzai has demanded that such attacks end, but the practice continues in areas of Pakistan, Somalia and Yemen that are not in any war zone. We don’t know how many hundreds of innocent civilians have been killed in these attacks, each one approved by the highest authorities in Washington. This would have been unthinkable in previous times.

The former president then went on to rehash criticisms of the detention facility at Guantánamo Bay, Cuba, which houses 169 prisoners with “little prospect of ever obtaining their freedom.” He decried that American authorities have obtained confessions by water-boarding detainees or intimidating them with “semiautomatic weapons, power drills or threats to sexually assault their mothers.” The detainees, however, cannot use the torture as a defense in court because, as Carter pointed out, “the government claims they occurred under the cover of ‘national security.’ Most of the other prisoners have no prospect of ever being charged or tried either.”

It is surprising that Carter avoids naming former President Bush for instituting this anti-terror policy, and even more astonishing that he refuses to condemn President Obama’s seeming inability to close Gitmo and reverse the legal policies continued there.

Since Carter is a life-long Democrat, he would probably find it politically unwise to name President Obama in such a critical manner during an election year. Though it is still surprising because, well, many of these policies are very much President Obama’s policies. And yet Carter took the safe (but ultimately true) route: pinning our atrocious anti-terror policies on a faceless bipartisan beast.