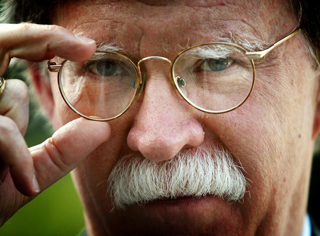 Former American ambassador to the United Nations John Bolton is running for president. This was, for some time, a rumor in certain circles, but Bolton had kept himself out of the spotlight for so long that many had forgotten he was even a potential Republican contender. It turns out eight months or so of other people gallivanting around as Republican hopefuls was enough to bring him out of the woodwork, however, with the most thinly-veiled presidential announcement since the time Tim Pawlenty mistakenly let Piers Morgan in on a little secret.

That announcement came in the form of a column entitled “Why I May Run For President” (emphasis mine) in Human Events, in which Bolton details the ways he sees national security and the economy as one in the same, and gripes that no other Republican candidates have discussed national security with the energy that he would like to see. “Failing to protect our national security inevitably endangers our economic prosperity by making us vulnerable to global adversaries,” Bolton writes, arguing that it is “clear” the President does not believe this is true given his treatment of Israel and his focus on domestic issues and that, if no other Republican will speak up for the significance of national security, he will run. There is, however, no doubt that he will do so.

What makes his threat most believable is how forthright he is about his reason for running. He specifically avoids saying anything that could be interpreted as “in it to win it” language– he’s in it to argue a case, to put in the national spotlight the importance of national security in the economic viability of the nation. As he concludes his piece, he suggests that “no Republican candidate has persuasively argued that our economic recovery and long-term prosperity are completely intertwined with a strong national security posture,” and that he will run if no one argues this to his satisfaction. Here’s a news flash: no one will, because, with the exception of Jon Huntsman, no one in the running has the foreign policy experience to make national security a cornerstone of their platform.

Even if they could, few candidates motivated by one issue in particular abstain from running. Third party candidates are often motivated by environmental issues, drug legalization, and other ideological monoliths, and they have far more of an incentive to run. The goal for these candidates is not to assume office, but to spark a conversation on their topic of choice, for which many are typically at least marginally successful. A Bolton run would almost guarantee a change in the Republican conversation from jobs to national security– if not a dramatic one, at least enough of one to make a run irresistible for someone like Bolton.

That level of certainty of a Bolton campaign makes it almost impossible for the media to care, however, as 2011 has brought in the most elaborate, irresistible presidential media teasing America has likely ever seen. Bolton tossing the word “may” into a column announcing an obvious presidential bid simply cannot compete with the synthetic drama of Sarah Palin‘s Roadtrip To Nowhere or Donald Trump‘s unbelievably effective birther-trolling. “Why I May Run” is the new “If I Did It”– a completely transparent declaration of intent disguised as a contemplation of a narrative that will definitely occur as a mere possibility. That’s not to say Bolton isn’t more qualified than either, nor to say that he wouldn’t deserve more of a spotlight simply due to his extensive experience in foreign policy, but in this day and age, qualifications are simply not enough to command attention.

Palin’s work as governor of Alaska was commendable, and anyone who denies her that fact is either ignorant of her record or a slave to their ill will towards her. But for all intents and purposes, running Alaska qualifies one to be CEO of Exxon-Mobil far more than it does for CEO of America. Palin very noticeably gained no foreign policy experience from her governance, and while she did a good job of running the Alaskan economy, that financial scene is far too idiosyncratic for the skills required to keep it afloat to translate to anything viable in the continental United States.

Then there’s Trump, who has never held public office, who has famously gone bankrupt multiple times, and made a name for himself in the only legal form of racketeering left in America: casinos and real estate. Predicting Trump to be anything less than a foreign policy disaster for the nation seems near impossible, and believing in the possibility that his executive experience in a highly artificial private sector would help him navigate government policy is a leap of faith far too high for most Americans, who once toyed with the possibility, to take seriously as the clock winds down.

And yet Bolton– who, like Palin, still serves as a Fox News commentator– gets even less attention than Gary Johnson, not the least because of how close to his chest he has kept his presidential aspirations. Now that he has come forward with a threat to run, however, it is difficult to believe anything will change for him. This despite of the fact– or possibly because of the fact– that his threat to run is far more believable than that of some of his peers. The “will they or won’t they” game has proven rather profitable for media outlets who have made it a side quest to the main road to the White House, tempting viewers with the luxury (or horror) of adding a colorful new character to the mix, that quirky sitcom neighbor who won’t ever get to run the show but will emphasize the everyman nature of the protagonist (Mitt Romney).

Bolton may have the quirkiness to sell as a fringe candidate, and the record (undersecretary of state, several White House advisory roles) to play hardball on a debate stage, but without the mystery of several months of aimless dithering, his is a candidacy doomed to irrelevance.