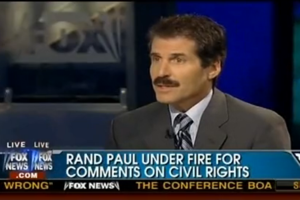 Pop quiz! What does John Stossel think of Rand Paul’s alleged (now debunked) opposition to the 1964 Civil Rights Act? Take three guesses. Stossel came out in completely predictable form today, asserting he was in “full agreement” with Paul’s belief that private businesses should be allowed to discriminate against anyone, including himself and America Live host Megyn Kelly.

After giving a quick recap of the day’s top story– Kentucky Senate candidate Rand Paul’s rampant libertarianism– Kelly asked Stossel for his opinion, and he couldn’t have given a less surprising answer:

“I’m in total agreement with Rand Paul. You could call it public accommodation, and it is, but it’s a private business. And if a private business wants to say ‘we don’t want any blonde women or mustached guys,’ it ought to be their right. Are we going to say to the Black Students’ Association that they have to take white people, or the gay softball association that they have to take straight people? We should have freedom of association in America.”

Kelly challenges him to the fact that the CRA was necessary, and later compares allowing discriminatory groups the right to associate with murder, which Stossel takes her to task for. Asked why he believes businesses that practice discrimination– even against “blonde women and mustached guys”– would certainly fail, he answered: “The free market competition would have cleaned the clocks of the people who didn’t serve most customers.”


While, on the whole, the Rand Paul Civil Rights Act story has been pretty destructive to debate on actual policies that will be discussed in Congress, one interesting thing about the affair is that it seems to really be hitting a nerve of solidarity in the usually dispersed libertarian media community, the members of which, with the glaring exception of Stossel himself, isn’t that far into the mainstream. The top story at Reason magazine right now is entitled “Everybody Loves Rand,” with a picture of the candidate to distinguish from the 20th century author. Reason alum and Washington Post blogger David Weigel took some heat for defending Paul today and gave a positive retweet to the Stossel interview; the latest episode of Judge Andrew Napolitano’s Freedom Watch web series includes an interview with Paul.

For a community that prides itself on its ideological unity being as easy to achieve as herding cats, this is about as unanimous as it gets. And it’s bringing out the libertarian sympathies in otherwise authoritarian conservatives like the folks at RedState or National Review‘s The Corner, too, or at least getting them to question the people attacking Paul, rather than Paul himself. That the solidarity will do anything to make the situation less embarrassing for Paul– who has already regretted his appearance on The Rachel Maddow Show last night— seems unlikely, as the accusation of racism and final conviction of extremism will be hard to erase from the Right’s new eccentric lead man.