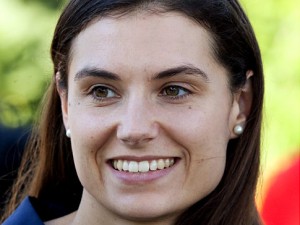 Krystal Ball, the 28-year-old Democratic candidate for Congress in the first district of Virginia, has recently been faced with a leak of several Facebook photos of her from a Christmas party six years ago. The photos have frequently been called racy and the credibility of her campaign has been questioned as a result.

This morning, Krystal Ball fired back in a statement accusing her critics of sexism. What happened to her, she said, is nothing unique – it could happen to any 28-year-old woman who grew up in the digital age – and they shouldn’t let their opponents use that to shame them into not running for office.

“Politics is a nasty game. I knew that coming in. I thought I could take it. But the day that I bought my first radio ads, my opponent called the station and inquired as to the size of the advertising buy. Two hours later, these photos were released by a right-wing smear blog with close ties to my opponent. I
don’t believe these pictures were posted with a desire to just embarrass me; they wanted me to feel like a whore. They wanted me to collapse in a ball of embarrassment and to hang my head in shame. After all, when you are a woman named Krystal Ball, 28 years old, running for Congress, well, you get the picture. Stripper. Porn star. I’ve heard them all. So, I sat in my husband’s arms and cried. I thought about my little girl. I couldn’t stand the idea that I had somehow damaged the cause of young women running for office. I couldn’t stand the idea that I might shame my family, my friends or my supporters in some way.

The tactic of making female politicians into whores is nothing new. In fact, it happened to Meg Whitman, one of the world’s most accomplished business women, just last week. It’s part of this whole idea that female sexuality and serious work are incompatible. But I realized that photos like the ones of me, and ones much racier, would end up coming into the public sphere when women of my generation run for office. And I knew that there could be no other answer to the question than this: Society has to accept that women of my generation have sexual lives that are going to leak into the public sphere. Sooner or later, this is a reality that has to be faced, or many young women in my generation will not be
able to run for office.

…My biggest support during this whole sad episode of my life has come from supporters of Hillary Clinton. In effect, they have been telling me that what happened to me could have happened to one of their daughters. They will not see their daughters called whores when they run for office just because of some college or post-college party. They will not watch the tide of everything they fought for washed away by the public exposure of female sexuality. Once again, like the heroes that they were a generation ago when they made their careers, they are stepping up to protect young women like me and to support us and to help us to grow up. We are young women. And we are dedicated to serving this country. And we will run for office. And we will win.”

Nearly eight months ago I wrote about Scott Brown’s campaign for US Senate in Massachusetts. More specifically, I wrote about how Brown had posed nude in a Cosmo centerfold in the 1980s – and how this seemed to have almost no negative consequence on his political career at all. In fact, some might even say it helped him: media commentators called him a “hunk” and brushed it off as a youthful mistake.

At the time, I argued that female candidates who had done similar things would never get a free pass from media scrutiny the way that Brown did. I didn’t have a perfect example to compare it to then but pointed out other examples such as the scrutiny over Michelle Obama’s arms, Hillary Clinton’s wardrobe, and Sarah Palin’s beauty pageant background.

Today, we see a female candidate for Congress who has the viability of her campaign dangerously threatened by a handful of harmless photos from a post-college gag party, in which she is completely clothed.  She’s been called racy and naughty; the photos have been referred to as “sex pics” by some blogs. They’ve been re-posted on dozens of blogs and attracted national television attention.

Scott Brown, also at age 22, the same age Krystal Ball was in her party photos, posed nude in Cosmopolitan – yet it did not bring nearly the same level of scrutiny or potential campaign damage that Ball has faced. There was no coordinated crisis communications response and TV interviews explaining the photos,  because no one perceived it as a crisis for Brown. In fact, some acknowledged that perhaps the nude photos helped his campaign and even gave him an advantage in terms of public recognition.

Why is it that the media goes haywire over a suggestive party photo of a woman candidate and her husband, but praises the male candidate who poses nude in magazines? After a supposedly epic year for women candidates in 2008, after the year of Sarah Palin and Hillary Clinton, isn’t the playing field supposed to be even for women candidates by now?

As Ball said, “The tactic of making female politicians into whores is nothing new.” But one would hope that by 2010, that tactic would finally be extinguished.