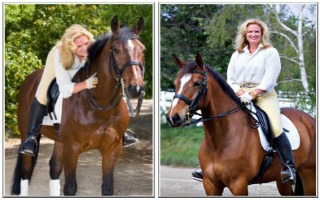 A massive expose in the L.A. Times on Tuesday resurrects the political attack on former Massachusetts Gov. Mitt Romney’s wife Ann Romney and her expensive hobby of keeping and riding dressage horses. The L.A. Times reveals a lawsuit that the Romney’s had to settle in which the extent of their addiction to pricey hobby riding is exposed. While the L.A. Times refrains from drawing political conclusions from their story, those conclusions had been made in the past by other media outlets that sought to shed light on Ann Romney’s pecuniary habits.

The L.A. Times article details Ann Romney’s numerous interviews on the subject of dressage horses, her family’s animal purchases and a civil suit in which Ann Romney had to testify over her impression of the health of a horse that was sold and later succumbed to an affliction which rendered it “unrideable.”

The 33 paragraph L.A. Times piece also makes quite clear that practicing the Olympic sport of dressage – which is sometimes referred to by its even more expensive-sounding moniker “horse ballet” – is not a cheap way to spend one’s time.

Dressage is not for the faint of wallet; it requires healthy outlays of cash for upkeep, training, transportation and veterinary care. It attracts some of the world’s richest people — the daughter of billionaire New York Mayor Michael R. Bloomberg competes. Yahoo co-founder Jerry Yang and his wife own dressage horses.

You want dollar figures? Oh, the L.A. Times has them:

Insurance documents in the court file indicate that from November 2006 to November 2007, Ann Romney paid $7,800 to insure five horses against mortality and theft for amounts ranging from $50,000 to $135,000 per horse, which she said was far less than their value. “I self-insure for the rest,” she testified. “Just expensive to have insurance.”

As for the case against the Romney’s that they may have sold off a lemon horse (that case reached an undisclosed settlement), the L.A. Times seems to think they’re on the case of a real scoop – if only due to the resistance with which their investigation was met from one of the Romneys lawyers.

Romney’s lawyers wanted to keep the case out of the public eye. In December 2010, one of her attorneys sent a letter to Robyn Ranke, the attorney for Norris, expressing dismay that Ranke refused to sign a confidentiality agreement.

“You can be assured we are not going to give any records … to the L.A. Times,” replied Ranke, “and are at a loss as to why you would even suggest such a thing.”

I am not about to indict the L.A. Times for “liberal bias” because, in general, I don’t believe such a thing exists. At least, not insofar as many on the right perceive it to exist. I see stories like these as something more akin to a reflection of the bubble of political opinion that has a tendency to congeal in some newsroom environments. The L.A. Times employed the conservative opinion writer Andrew Malcolm for many years as their chief political blogger – a victimized conservative besieged on all sides by liberal opinion and analysis might be unable to credit Los Angeles’ paper of record with this clear showing of bipartisanship.

However, to suggest that this L.A. Times piece is merely a bit of reporting with no political value to the Obama campaign is impossible given how the President’s reelection effort is highly likely to have the “dressage-horses-are-expensive-so-the-Romneys-are-out-of-touch” attack prepped and ready to launch. Especially given that this is not the media’s first run at the subject.

A 2007 article by the New York Times’ Jodi Kantor explains how Ann Romney’s dressage hobby hurt her husband in his 1994 race for the Senate against the late Ted Kennedy.

Mrs. Romney’s debut as a political wife was somewhere between a disappointment and a disaster.

Her husband was running unsuccessfully for a United States Senate seat in Massachusetts in 1994, and Mrs. Romney was derided as superficial, pampered and too deferential to him.
…
Dressage is a sport of seven-figure horses and four-figure saddles. The monthly boarding costs are more than most people’s rent. Asked how many dressage horses she owns, Mrs. Romney laughed. “Mitt doesn’t even know the answer to that,” she said. “I’m not going to tell you!”

Of course, the recently outed “Gawker mole” and former producer with Fox News Channel’s The O’Reilly Factor, Joe Muto, revealed an unaired tape of Gov. Romney discussing his dressage horses with Fox host Bret Baier and later said he felt that the hobby was damaging to Romney.

“I think Mitt loses points with the GOP base for his correct pronunciation of dressage,” Muto wrote at the time. One would never credit a burned asset like Muto as being a savvy political operative, but that he found the association of Romney with expensive horses damaging reveals how such an attack on Romney’s wife’s passion would play with the Democratic base and independent minded voters.

Mentioned in both the L.A. Times and the New York Times stories are the facts that Ann Romney used her love of horses as a means of recovering from severe attacks of multiple sclerosis. But that is merely an afterthought worthy of no analysis or detailed reporting.

I should make clear that the vetting of the Romneys in the press is a good thing. It should continue apace — such vetting does all voters a great service ahead of an important presidential election. I take issue with those who insist that the President does not receive the same level of scrutiny in the press; the President and the First Lady are subject to intense examination. But it is the level of coverage that they receive that is disproportionate. So much about the lives of the Obama’s is addressed in the press, but then quickly branded as irrelevant and/or beyond the bounds of acceptable political discussion. Meanwhile, we are treated to a national debate about the recuperative value of keeping and riding horses where such a discussion would be deemed thoughtless if the roles were reversed. That is where conservatives who complain about bias have a real point.