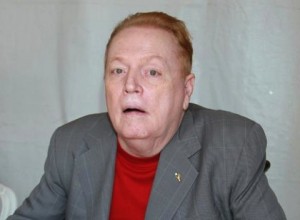 Two days ago a hacker group claimed to have gotten its hands on Mitt Romney’s tax returns, and would be releasing them on September 28th unless the Romney campaign wire transfers $1 million in Bitcoins. Now news is breaking that Larry Flynt, the founder of Hustler magazine, is offering $1 million to anyone who can provide information on Romney’s tax returns. Flynt is going as far as to take out full-page ads in national newspapers next week to make his offer more public.

RELATED: Romney Says Another Reason Not To Release Tax Returns Is To Keep Church Donations Private

Flynt is no fan of Romney, and last month spoke out strongly against a Romney administration potentially launching a federal crackdown on ponography. Now Flynt is weighing into the discussion over Romney’s tax returns with his offer.

Flynt is taking out full-page ads in this Sunday’s edition of The Washington Post and Tuesday’s USA Today that promises “up to $1 million” for the dirt on Romney’s “unreleased tax returns and/or details of his offshore assets, bank accounts and business partnerships.” (But before you go calling the Hustler hotline, be aware that Flynt will need “documented evidence of your claims.”)

According to the ad, all correspondence will be kept confidential—so if you’re a former Bain exec with a bone to pick (or without a golden parachute), you might want to get a pen.

Romney has consistently refused to release his tax returns despite increasing political pressure over the past few months to do so.