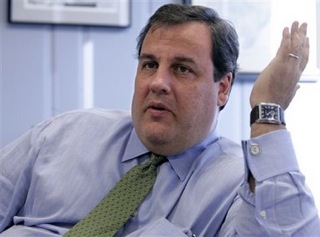 New Jersey governor Chris Christie is not running for president in 2012. He has said so himself many, many times. And yet this week, once again, rumors have surfaced that the freshman governor is “in talks” with Republican bigwigs to hop in, months behind a nine-person Republican field already cannibalizing itself more than a year before the actual election. No matter what Christie himself does, it seems his nonexistent campaign has mutated into the zombie presence of this election cycle: no matter how many times the candidate himself tries to kill it, the undead rumors keep come back to munch on Republican strategist brains.

The chatter commenced anew thanks to NewsMax‘s recent article claiming Gov. Christie would decide “in days” whether he was running for President after a “hush-hush powwow” between top Republican donors and the New Jersey governor. The context of the piece is even more bizarre than the rumors that the governor is thinking about it. It is apparently Indiana governor Mitch Daniels— the great Republican hope that never was– who is pushing for Christie to jump in. Christie has both publicly noted he finds the current GOP field unsatisfactory and that he really, really has no interest in running for president, can everyone just leave him alone now?

No, apparently; they can’t. The whispers culminated in this breathless report leading this morning’s Politico Playbook:

Texas Gov. Rick Perry’s debate stumble provided an opening for Ken Langone, co-founder of The Home Depot, to renew his effort to use donor pressure to lure New Jersey Gov. Chris Christie into the GOP race. Langone has been making calls to potential donors and bundlers, urging them to hold back on jumping to Perry or Mitt Romney, arguing that Christie might run. Christie is still reluctant, although the donor persistence is something the party hasn’t seen in 30 years. A person familiar with Christie’s mind phoned Playbook after Maggie Haberman and others disclosed the new frenzy:

“There are three reasons [Christie probably won’t take the bait.] One is: He genuinely believes that he’s not prepared on an issue and substance basis to address all of the things you have to address as a candidate, and he’s leery of learning on the fly. Two, the performance of Perry shows the dangers of late entry: It’s right in front of him. And while others use that as a reason for him to GET in, for him, it’s the opposite – it’s the reason that validates his decision NOT to get in this late. And the third is that … you sit and look at the map … and the path for Chris Christie [to get more delegates than Romney] is difficult to chart … If he gets in, the first thing he has to do is beat Perry and establish himself as the REAL anti-Romney. And the path to doing that is difficult: Perry’s not going to just drop out.”

For most of the election cycle, the Christie rumors had been treated as something of a childish obsession in the party arising out of the desperation of not having sufficiently “electable” (whatever that means) candidates in the top tier– akin to the bizarre floating around of names like Rep. Paul Ryan and former New York governor George Pataki during the time Perry was still considering a run. As Jon Stewart put it then in a moment of “even broken clocks are right twice a day” brilliance, the candidates were like trendy toys an increasingly impatient mother bought her children, with none meeting the demands of the child (“Before I get you anything, where is your Ron Paul?!” Stewart’s “mother” demanded to a child begging for a “Perry”).

But the Christie phenomenon is something different inasmuch as it has proven not to be ephemeral. For every other “candidate” being tossed into the fray without consent, a short “no, I’m not interested” has been enough to dissuade the mysterious donors that start up these rumors in the first place. It worked for Rep. Ryan and Pataki, and people mostly stopped talking about Mike Huckabee and Donald Trump after they declared the Republican nomination wasn’t for them (though, to be fair, media exhaustion had just as much to do with the latter). Gov. Christie, on the other hand, has to deny the rumors about once a week, finally giving up with the realization that the only possible way to the buzz around his “campaign” would be to kill himself. This may be evidence that he would be a much more formidable candidate in the election, but by promulgating– both publicly and in surreptitious “donor” meetings– the idea that not even the Republican base would vote for the 2012 nominee if he isn’t Chris Christie, the party does itself a disservice. Independents respond to passion more than anything from parties they perceive as jaded, and no one in the past two decades has channeled that passion more efficiently than Barack Obama. As Donald Rumsfeld famously proclaimed, you go to war with the army you have, not the army you want to have, and Republicans need to let go of the idea that loudly griping that their army isn’t good enough is no way to win a political war.

So, no, Christie is probably not even going to bother swatting these rumors down; he’s too busy saving the hospital that birthed yours truly and moonlighting as a campaign strategist to this sixth grader– the job New Jersey taxpayers pay him to do, and the job that he needs to excel in to give these rumors any weight in the first place. And while some candidates with flimsy resumes– yes, we’re looking at you, Herman Cain— think they can waltz into the presidency unprepared while others with actual political experience, but maybe less charisma, get shunned, should these almost certainly false rumors be just that, Christie will only wisely emerge as a more formidable candidate in 2016 or 2020, and for Republicans, it should be well worth the wait.