Libertarian Candidate’s New Ad Pleads: ‘Be Libertarian With Me This One Time’
VIDEO

Libertarian Candidate’s New Ad Pleads: ‘Be Libertarian With Me This One Time’ 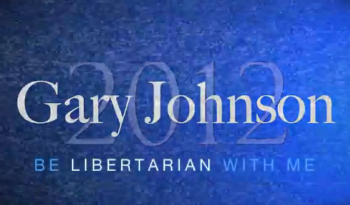 Libertarian presidential candidate Gary Johnson released a dark new campaign ad on Wednesday, in which the candidate pleads with members of all third parties (Green, Constitution, etc.) to “be libertarian with me this one time” so that he may prove that “peace, prosperity, and freedom” work once and for all.

“Members of all political parties,” Johnson says in the ad, “I reach out to everyone with a vote and an axe to grind. From the Tea Party, the Constitution Party, the Green and Libertarian parties, I call out to all of you, including the disaffected and disillusioned among the Republicans and Democrats.”

This is somewhat similar to the strategy libertarian-ish Republican candidate Ron Paul took in 2008, when he publicly aligned with perennial independent candidate Ralph Nader, Green candidate Cynthia McKinney, and Constitution candidate Chuck Baldwin, in an attempt to band together all third parties to promote a singular alternative to the two major parties.

“We the people will never agree on the small things,” Johnson’s ad continues, “but let’s agree on the big things: our leaders have blown it. If we don’t get control of this ship together and fix it together, we all go down with it together … Let’s put our parties and our differences aside, one time.”

“Be libertarian with me for one election,” Johnson pleads. “Together we’ll stop the spending and end the wars. Together we’ll rebuild our own roads, bridges, schools and hospitals instead of building theirs half a world away. Together we’ll restore our industrial might and our economy. And if, in four years, we the people decide we don’t like peace, prosperity, and freedom, we can always vote tyranny back into office again.”

Check out the ad below:

In addition, on Friday morning, Johnson appeared on MSNBC’s The Daily Rundown, where host Chuck Todd asked the candidate if he thinks he will steal votes away from Republican candidate Mitt Romney in November.

He believes he will take votes away from both parties because “the majority of Americans fall in the category of being fiscally responsibility and socially tolerant. I’m in that category. … I think I do better than Obama when it comes to civil liberties. … I think I do better than Romney when it comes to dollars and cents. And I do base that on the fact that I was a two-term governor of New Mexico, and I think I was very successful.”

Johnson does make a good point: his record as New Mexican Governor should seem remarkable to members of both parties. Republicans should like him because he vetoed more than 750 bills, never raised taxes once, and left New Mexico with a budget surplus; Democrats should like him because he’s adamantly pro-choice, anti-war, and advocates a “treatment over criminalization” method to fighting the drug war.